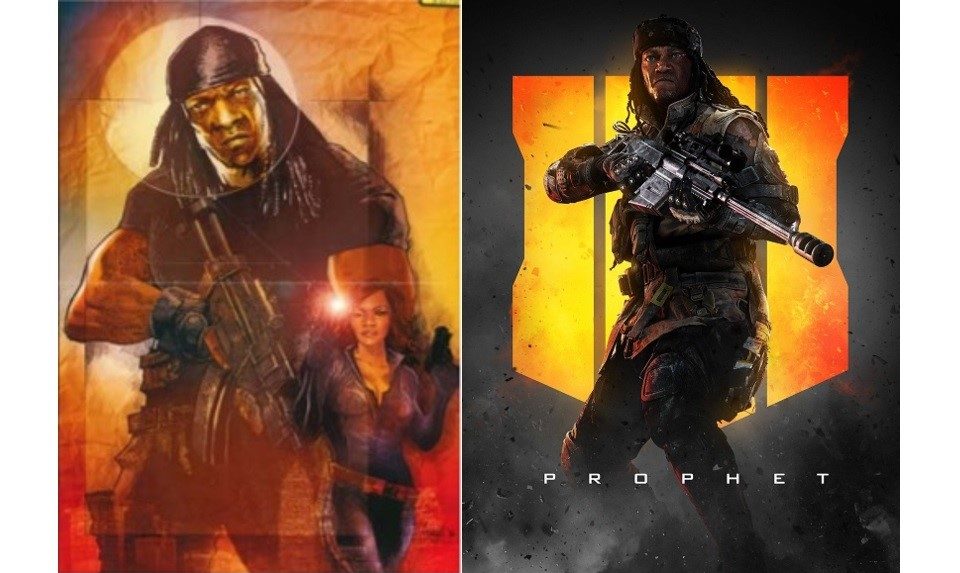 With a simple checkmark, after a four-day trial, the jury found that Activision did not infringe on Huffman’s copyright.

This means that, as it stands, Huffman will not be seeing any monetary damages from this lawsuit. Huffman will likely file a motion for judgment as a matter of law (JMOL), meaning that he asks the judge to reverse the jury verdict as being unsupported by the the evidence in the case, but that is unlikely to succeed.  Huffman could also try to appeal, but thanks to the Seventh Amendment courts give great deference to jury verdicts, so such verdicts are difficult to overcome. 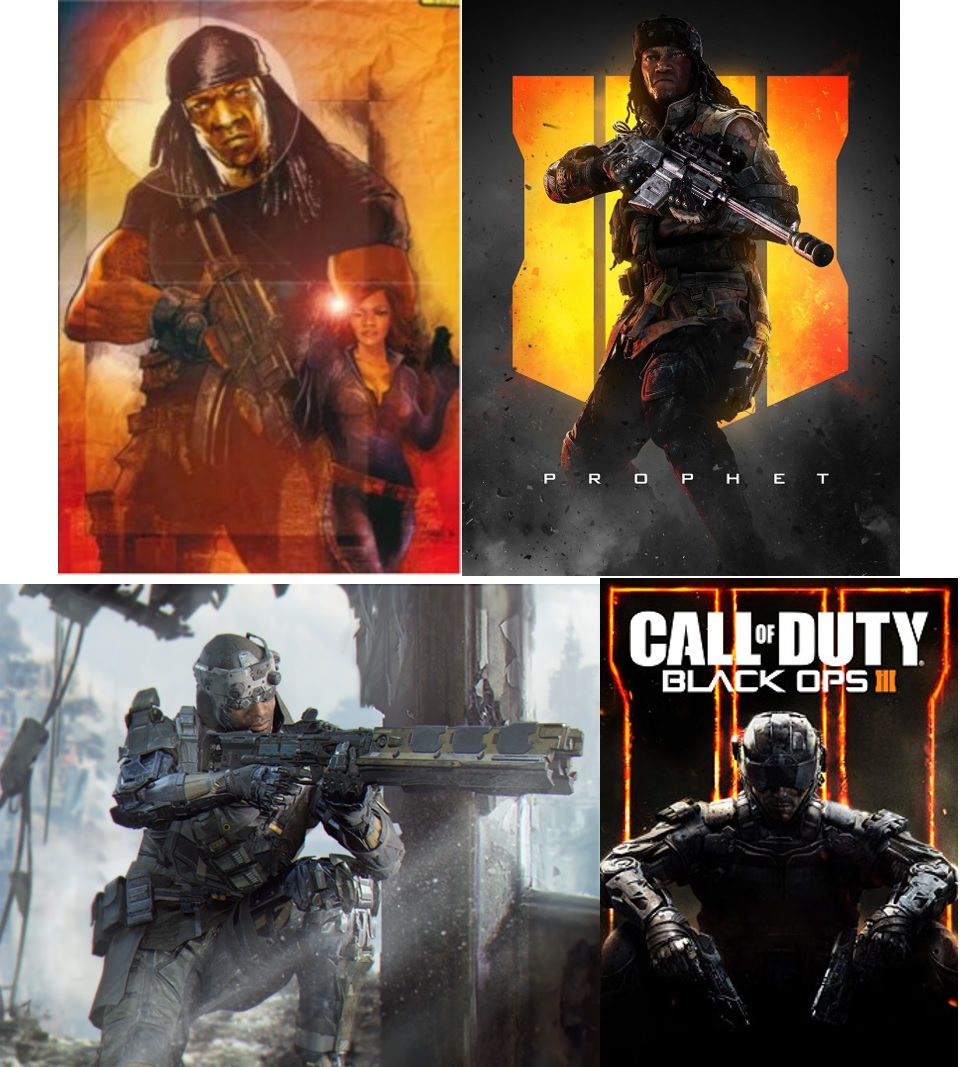 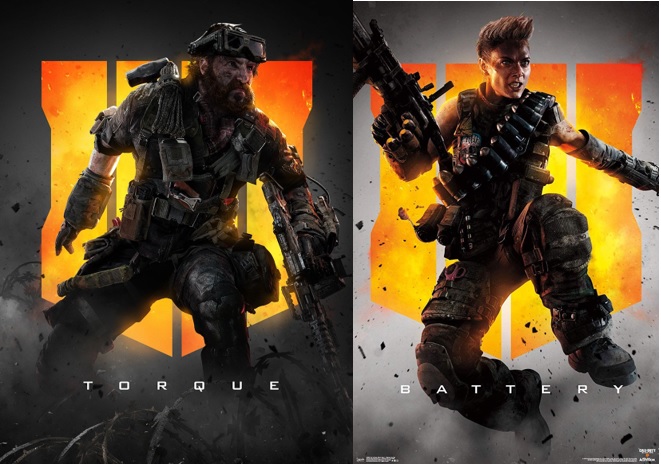 The G.I. Bro poster depicts a muscular man with dreadlocks wearing a durag and a black t-shirt while holding a submachine gun with his right hand on the trigger. He also has gloves and pants with various pieces of tactical gear strapped on. The character is facing the viewer while standing in front of a background consisting of red, orange, and yellow with a woman in a jumpsuit holding pistols upward in the bottom corner.

The image of Prophet depicts a man with dreadlocks wearing a durag and a long sleeved tactical shirt while holding a sniper rifle with his right hand on the trigger. He also wears gloves and has various pieces of tactical gear strapped onto his outfit. Prophet is looking slightly away from the viewer while standing in front of a smoky background and the red, orange, and yellow Black Ops 4 logo that consists of the Roman numerals for four with a fire effect.

In its motion for summary judgment, Activision argued that Huffman does not have standing to bring the suit because he assigned the copyright in the G.I. Bro poster to the WWE via Contractor Nostalgia Agreements (“NAs”). However, Huffman argued that the NAs he entered into with the WWE do not apply to the G.I. Bro poster. The Court found that the arguments around the NAs present an issue of material fact that precludes summary judgment. Hoffman also claimed that Activision removed his copyright management information (“CMI”) from the G.I. Bro poster and replaced it with false CMI, which would be a violation of the Digital Millennium Copyright Act (“DMCA”). However, the Court found that Huffman did not introduce sufficient evidence that the CMI had been removed or altered and granted Activision’s motion for summary judgment on this issue only.

Huffman is also seeking all profits attributable to the alleged copyright infringement based on gross revenue from Black Ops 4. Activision argued that the Prophet character did not drive sales of the game despite the character appearing in marketing materials, so revenue from Black Ops 4 should not be used in potential damages calculation. The Court found that “a reasonable jury could find that sales of Black Ops 4 are reasonably related to Defendants’ use of the Prophet Image,” and denied Activision’s motion for summary judgment on this point.

To prove factual copying, Huffman must show that Activision used the G.I. Bro poster in creating the Prophet image. This may be “inferred from (1) proof that the defendant had access to the copyrighted work prior to creation of the infringing work and (2) probative similarity between the copyrighted work and the allegedly-infringing work.” Alternatively, if the works are strikingly similar so that the similarities “can only be explained by copying, rather than by coincidence…” then proof of access is unnecessary.

Activision claims that it had never seen the G.I. Bro poster, but Huffman argues that he had distributed it at Comic Con events for years. The Court denied summary judgment on this point and said that a reasonable jury may find that there is a “reasonable possibility of access.” The Court also found that the two images “clearly share similarities and potentially even have striking similarities,” making summary judgment inappropriate. These issues will be decided by a jury.

At trial, Activision may reference its marketing materials from previous Black Ops games as part of its defense. Black Ops 4 is a prequel to Black Ops 3, a game set in the future in which the specialist Prophet also appears. In Black Ops 3, Prophet has “replaced 90% of his body with cybernetics to enhance his fighting ability,” including replacing or covering his skull with cybernetics, so he is bald. Black Ops 4 takes place prior to the cybernetic upgrades to Prophet. Additionally, the Call of Duty: Black Ops series has been using orange or fiery effect Roman numerals for each game in the series since Black Ops 2 released in 2012. The primary marketing image for Black Ops 3 is of a specialist in front of a smoky background and the fiery Roman numerals for three. There are also marketing images for Black Ops 4 of the other specialists in the game each standing in front of the same Roman numeral background as appears in the Prophet image.

We will continue to track this case and provide updates on interesting developments.