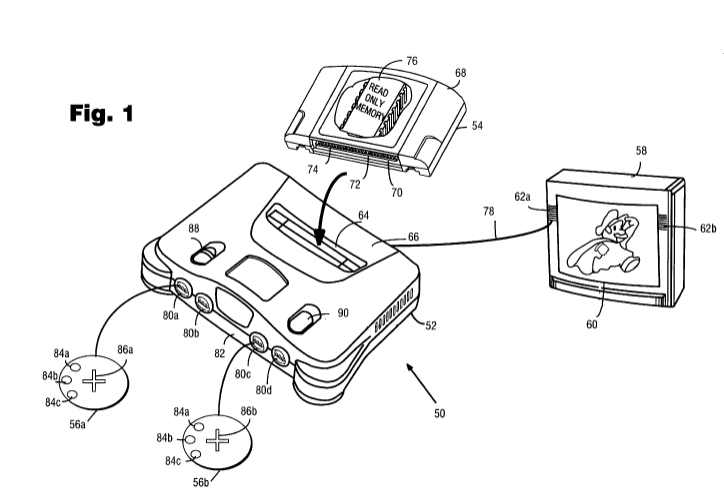 U.S. Patent No. 6,139,433 (the ‘433 patent) and related to the Nintendo 64 console (“N64”) and the smash hit game, Super Mario 64 (“SM64”). The ‘433 patent details the N64 console, the joystick controller, and the first ever player-controlled camera, as well as several SM64 controls and mechanics. Normally, patents for consoles do not include information about a game but here the N64 was a huge technological leap forward, and the first N64 prototype came after some development on SM64, meaning that the N64 was designed around certain game functionalities which needed to be exemplified in the patent. The ‘433 patent reflects that SM64 and the N64 were developed closely in tandem. 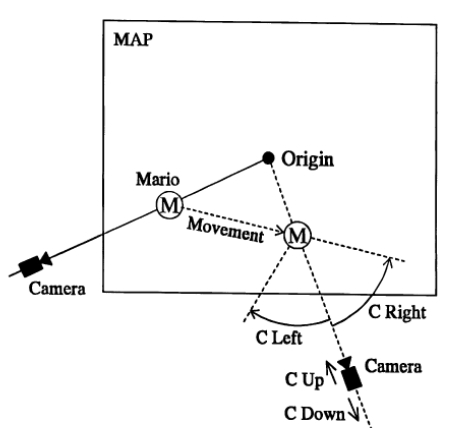 The ‘433 patent includes comprehensive control schemes for SM64 and how the player object reacts to inputs directionally, with different animations, as well as accounting for speed of movement and animation based on slopes. The joystick allows different amounts of directional input to result in different speeds and distances situationally. The 3D environment storage location stores terrain, slopes, and velocity information which alter how far and fast a player object moves in response to manipulation of the controls. This includes environmental conditions such as wind which will control the players movement, for example to move in the direction of the wind. 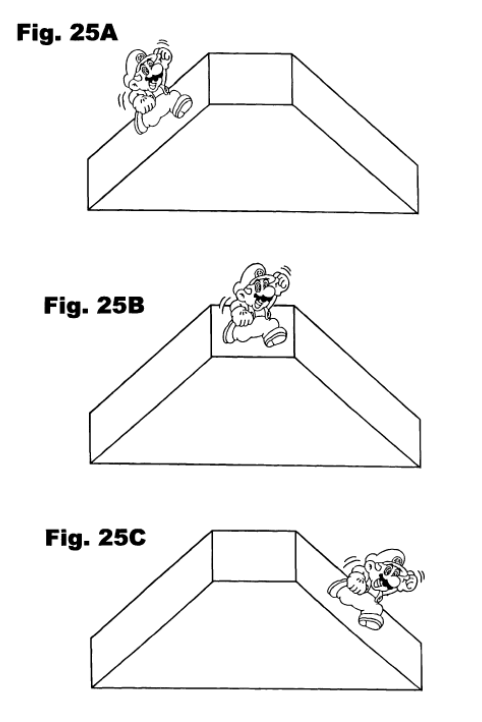 The camera also can change based on these detected conditions and has different modes, including parallel tracking for levels like Rainbow Ride, a fixed mode which can be seen in some rooms of Boo’s Big Haunt, and modes that allow functions like swimming and flying. 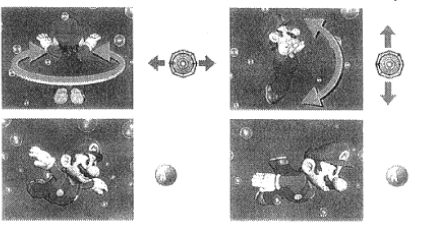 The N64 and SM64 were widely influential on game and console designers, as after this the player-controlled camera and joystick controls became commonplace. The game was designed with free roaming in mind and player choice, which has since become a staple of game design. The game and console were both extremely successful and SM64 is still popular, with rereleases on the Wii and Switch, nearly 2 million followers on Twitch, and competitive speed runners still breaking records in 2021. The camera used in the game is now complained about by players for being unwieldy, but is still important amongst speed runners to create glitches to achieve record runs. Interestingly, some coins cannot even be reached in the game without use of glitches and one coin was collected for the first time 18 years after the games release.

As the game and console celebrate the 25th anniversary of their release this month, the concepts that they introduced to game design remain staples of the industry.