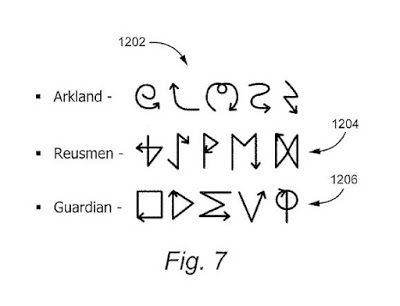 Fans of fantasy stories such as The Lord of the Rings will appreciate this patent, which allows a player to invoke magic or other special powers. The system works by instructing the game player to hold their motion sensitive controllers (such as Nintendo’s Wiimote, for example) in a certain way. When the player moves the controllers according to the instructions given on a display such as a monitor, the magic power is activated. The instructions could range from simply gesturing in a single direction, to more complex instructions such as tracing symbols in the air with a player’s wireless controller. Some spells could require the use of the motion sensitive controller to replicate multiple symbols by gesturing in the air. The outcome of the magic activated by a player’s movement of the controller can depend on the speed of the movement, or accuracy, for example. The ability to gesture to cast spells will make a user feel transported to Hogwarts, or even possibly like they are using a Jedi Mind Trick.

A system for allowing a player to invoke magic or other special powers in a video game is provided. To activate the magic, the player moves a motion detecting controller in accordance with one or more provided instructions. The outcome of the activation of the magic can be determinate on, for example, speed, accuracy, etc. Controllers in one or both hands may be used, and the instructions can be as simple as single direction gestures and as complex as multi-directional symbols which must be traced in the air. A sequence of any type of instructions may also be provided to instruct the activation of the magic.