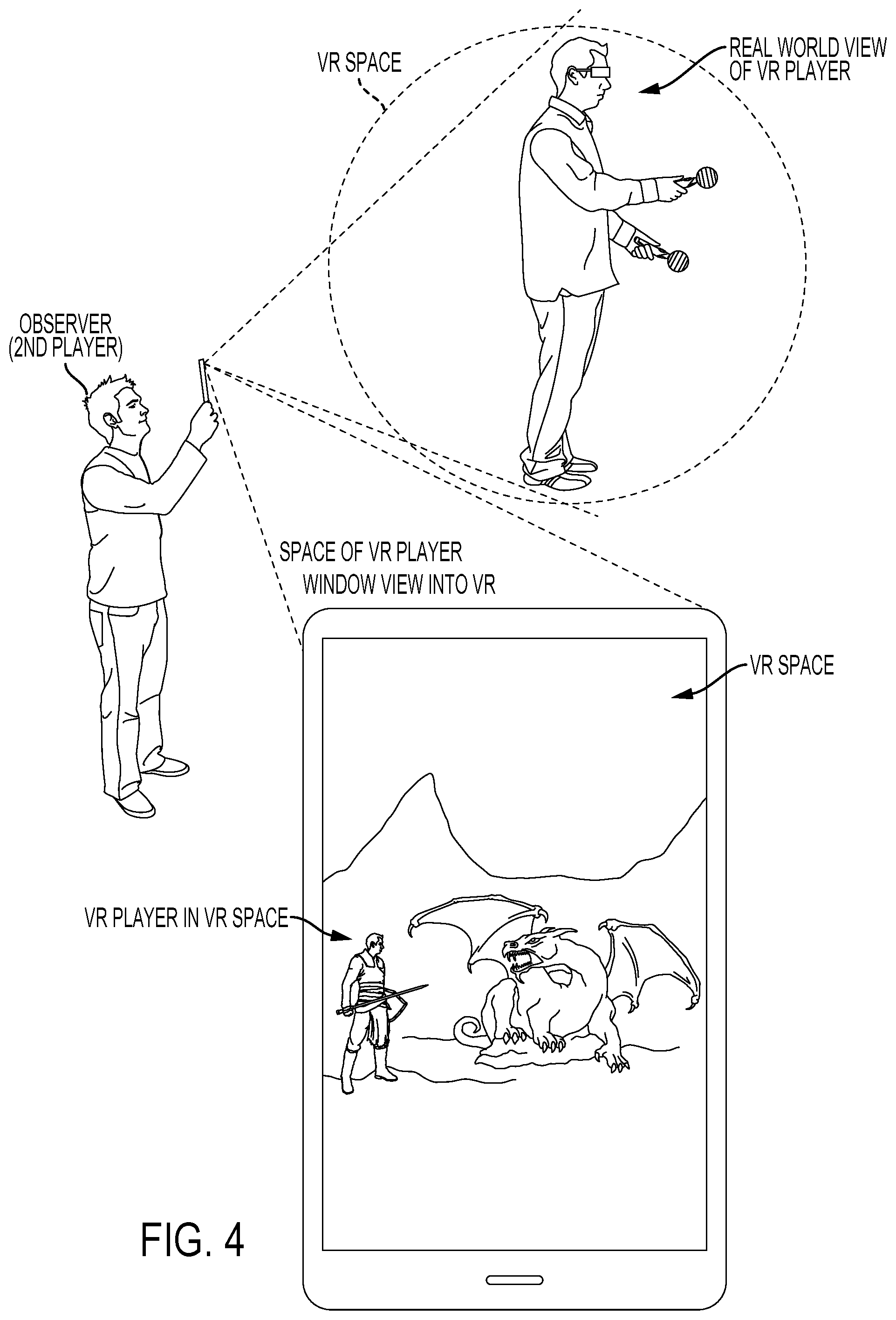 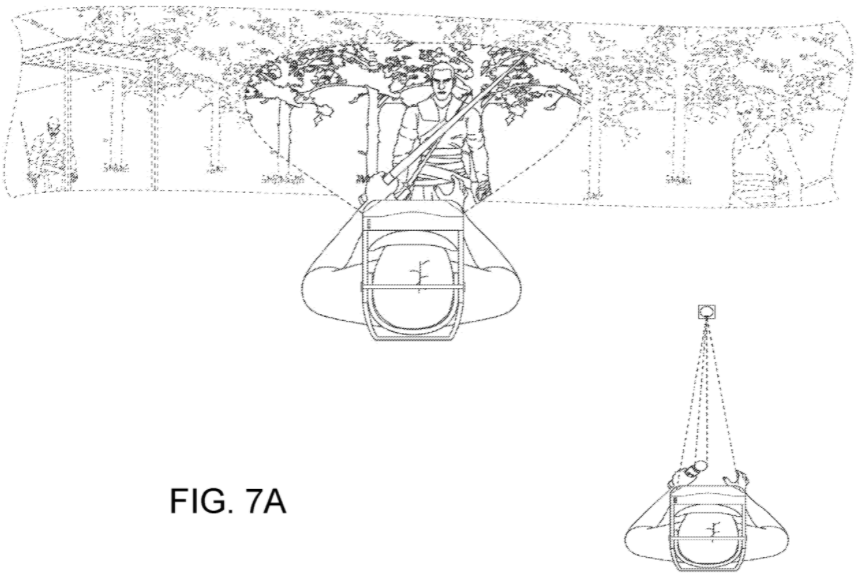 U.S. Patent No. 10,987,574 (the ‘574 patent) relates to a head mounted display (HMD) that uses a depth camera to track and render a user’s hand in virtual reality. The ‘574 patent details an HMD with a depth camera in the HMD’s housing. The camera is oriented to capture depth data of an area in front of the housing and the HMD has a processor which uses that data to identify movement of real objects and render the objects (and the objects’ movement) in virtual reality. The real object is the hand of the HMD user and the hand’s virtual counterpart is displayed from a perspective in front of the user. The virtual hand is displayed as a continuation of at least part of the arm of the user, to convey depth to the user as the user extends their arm into virtual reality. The ‘574 patent could be used to make virtual reality experiences more immersive by representing more movements that the user is making with their real body in the virtual world.

A head mounted display (HMD) is provided. In one example configuration, the HMD has housing and a view port. The view port has a screen for rendering a virtual reality scene. The HMD has a communications device for exchanging data over a network. The HMD has a depth camera integrated in the housing and oriented to capture depth data of an environment in front of the housing. A processor is provided and is configured to use the depth data captured by the depth camera to identify real objects in the environment. A real object is rendered into the virtual reality scene. The real object is tracked such that movements of the real object are shown as movements in the virtual reality scene. The real object captured by the depth camera in the environment is a hand of a user wearing the HMD. The hand of the user is rendered as a virtual hand, and movements of the virtual hand are displayed in the screen of the viewport from a perspective that is in front of the user.

U.S. Patent No. 10,395,428: HMD transitions for focusing on specific content in virtual-reality environments

U.S. Patent No. 10,395,428: HMD transitions for focusing on specific content in virtual-reality environments 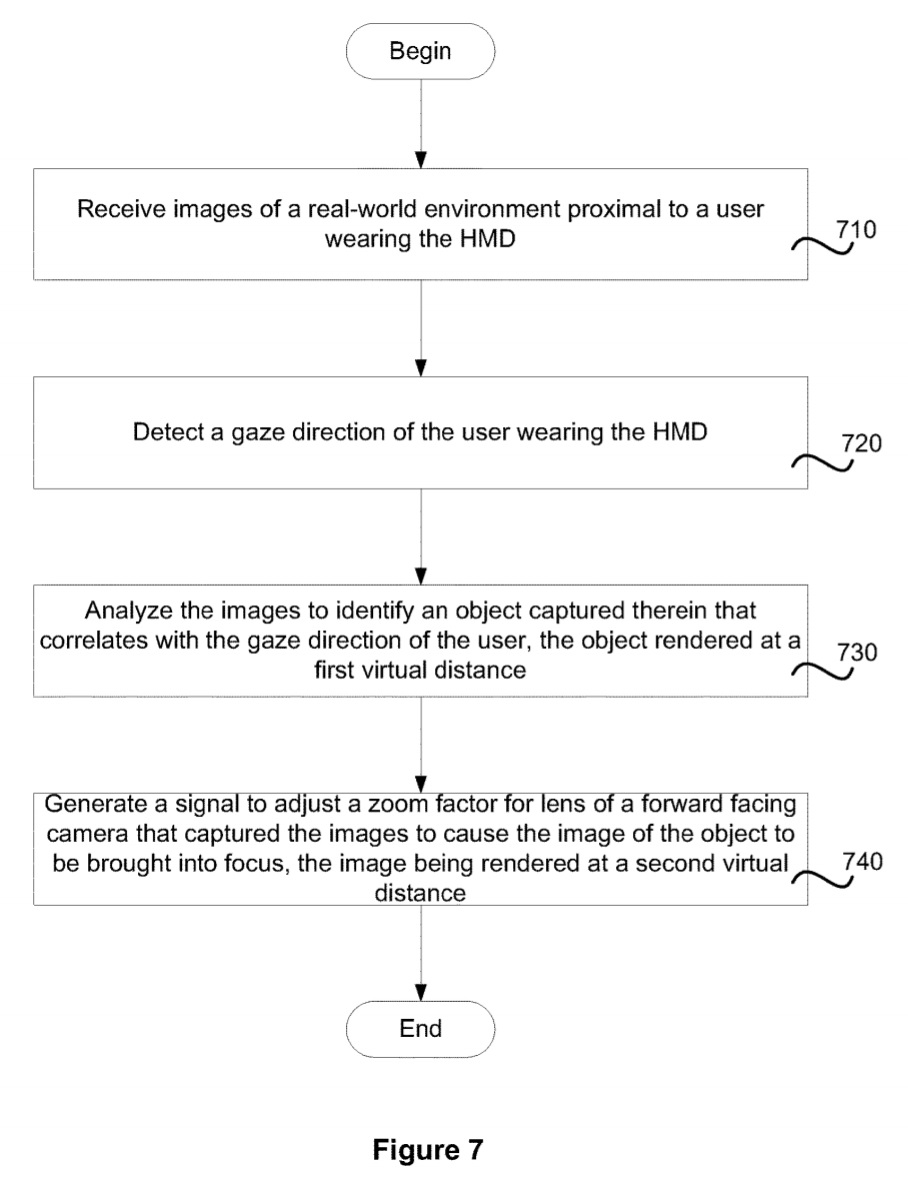 Summary:
U.S. Patent No. 10,395,428 (the ’428 Patent) relates to bringing objects into focus on the screen of a head mounted display (“HMD”) based on a user’s gaze. The ’428 Patent details a method of an HMD receiving real-world images from the HMD’s forward facing camera(s), or images of a virtual reality (“VR”) scene and while rendering those images, also using sensors in the HMD to detect an HMD user’s gaze direction. The HMD user’s gaze direction is used to bring objects in the rendered images into focus on the HMD’s screen. In some embodiments, the sensors measure the amount of time that a user has been gazing at an object to meet a minimum threshold before adjusting the zoom factor to bring an object into focus. An object in a real-world image from the HMD cameras may be both optically and digitally zoomed, while an object in a VR scene may be digitally zoomed. The zoom factor may be adjusted based on the user’s known vision characteristics. In pre-recorded images, historic data from other users may be used to determine optimal zoom factor settings based on what may have caused other users dizziness or motion sickness.

Abstract:
Methods and systems for presenting an object on to a screen of a head mounted display (HMD) include receiving an image of a real-world environment in proximity of a user wearing the HMD. The image is received from one or more forward facing cameras of the HMD and processed for rendering on a screen of the HMD by a processor within the HMD. A gaze direction of the user wearing the HMD, is detected using one or more gaze detecting cameras of the HMD that are directed toward one or each eye of the user. Images captured by the forward facing cameras are analyzed to identify an object captured in the real-world environment that is in line with the gaze direction of the user, wherein the image of the object is rendered at a first virtual distance that causes the object to appear out-of-focus when presented to the user. A signal is generated to adjust a zoom factor for lens of the one or more forward facing cameras so as to cause the object to be brought into focus. The adjustment of the zoom factor causes the image of the object to be presented on the screen of the HMD at a second virtual distance that allows the object to be discernible by the user.

Illustrative Claim:
1. A method for presenting an object from a real-world environment on a screen of a head mounted display (HMD), comprising: receiving images of the real-world environment proximal to a user wearing the HMD, the images received from one or more forward facing cameras of the HMD and processed by a processor of the HMD for rendering on the screen; detecting a gaze direction of the user wearing the HMD, using one or more gaze detecting cameras of the HMD that are directed toward one or each eye of the user; analyzing the images to identify an object captured in the images of the real-world environment that correlates with the gaze direction of the user, wherein an image of the object is rendered at a first virtual distance that causes the object to appear out-of-focus for the user; and generating a signal to adjust a zoom factor for lens of the one or more forward facing cameras so as to cause the image of the object to be brought into focus, wherein adjusting the zoom factor results in the image of the object to be presented on the screen of the HMD at a second virtual distance, wherein the signal is generated upon determining the gaze direction of the user directed toward the object lasts at least a pre-defined length of time, and wherein the zoom factor is adjusted to cause the object to be rendered at the second virtual distance for a pre-defined period and upon expiration of the pre-defined period resuming rendering images from the real-world environment without the zoom factor. 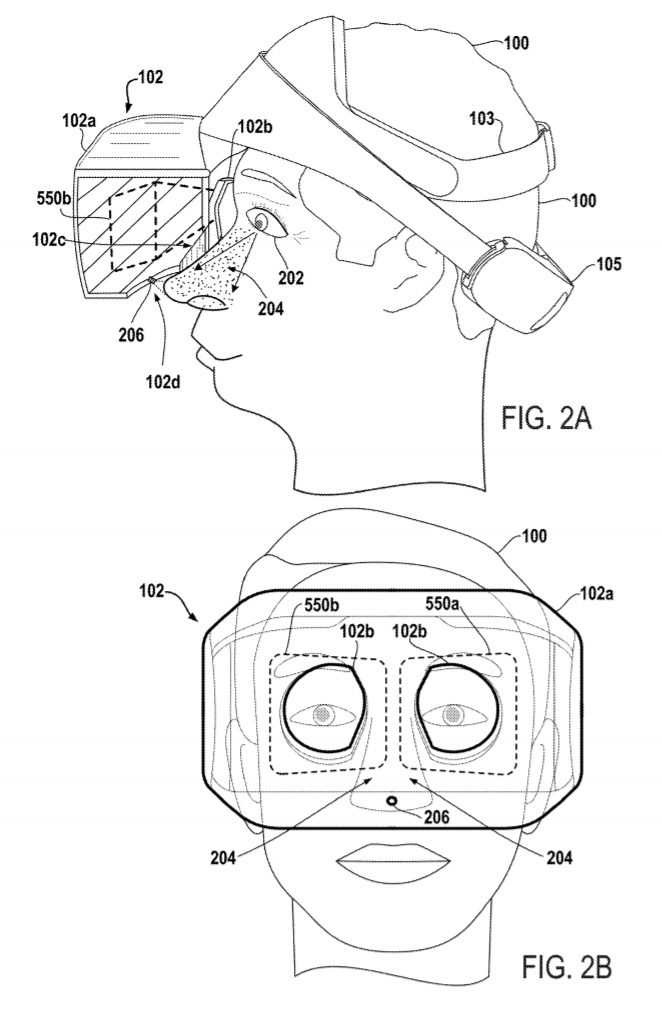 Summary:
U.S. Patent No. 10,636,217 (the ’217 Patent) relates to tracking the facial feature movements of the user of a head mounted display (HMD) to an avatar of that HMD user that can be viewed by other HMD users. The ’217 Patent details a method of detecting an HMD user’s eye gaze and mouth movements with eye gaze sensors and cameras on the HMD. A virtual face is generated for the HMD user’s avatar using the captured eye gaze and mouth movements. The position and size of an HMD user’s nose may also be detected and used to capture facial feature expressions along with eye gaze and mouth movements. Using this data, a face is generated for the avatar that approximates the facial movements of the HMD user. Other players may see the generated virtual face of an HMD user when they are all in a perspective that allows line of sight or a viewable angle of the virtual face. 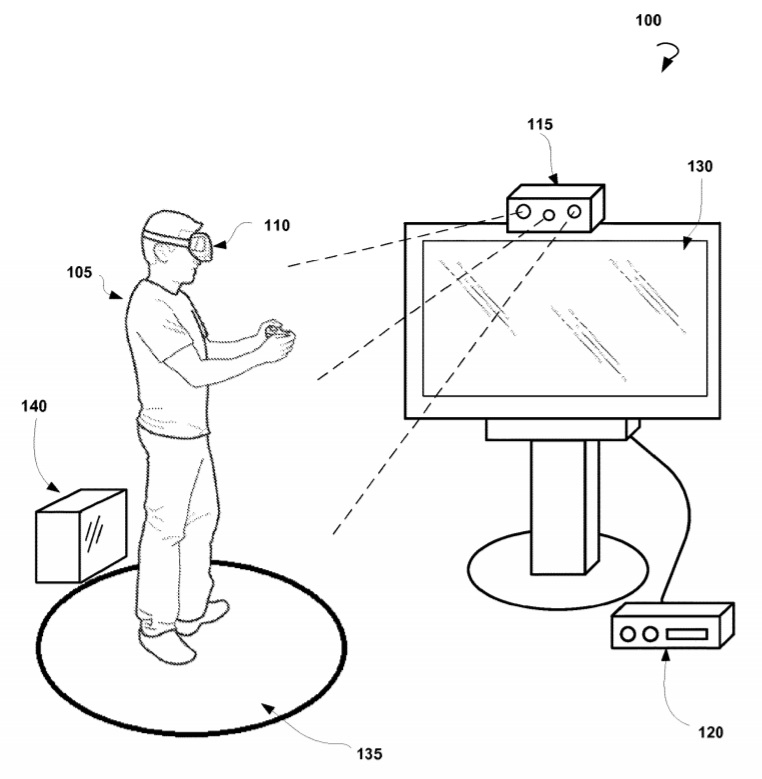 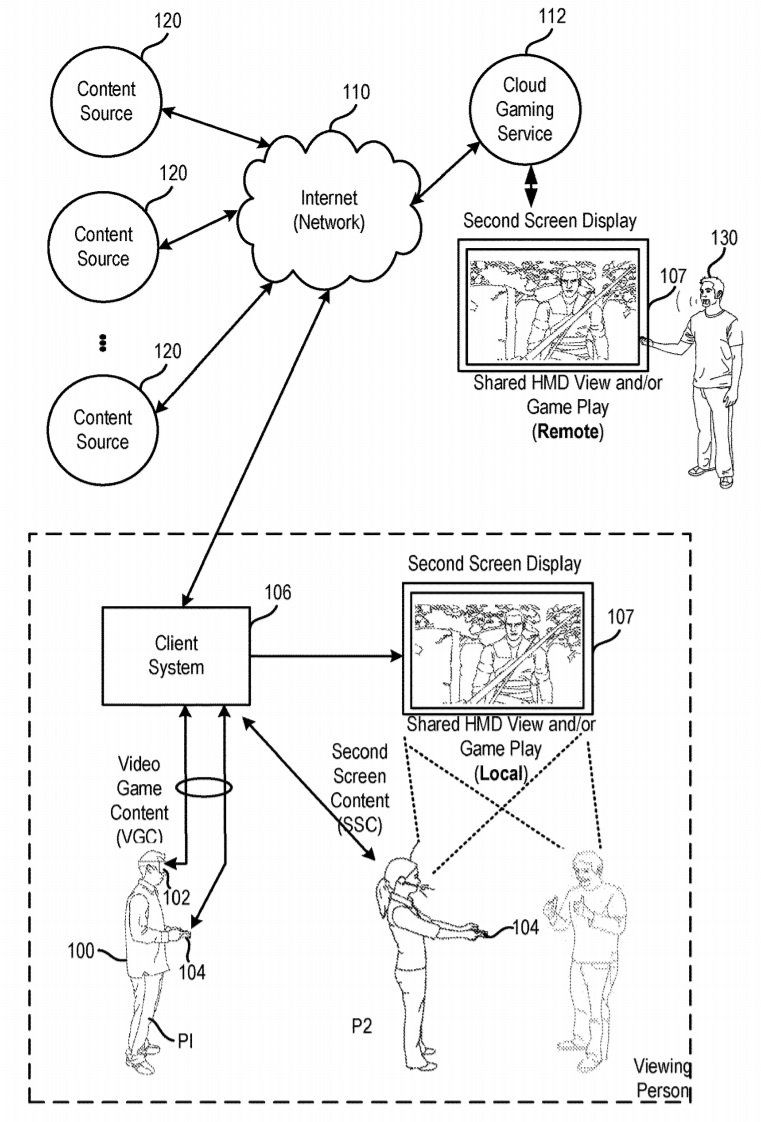 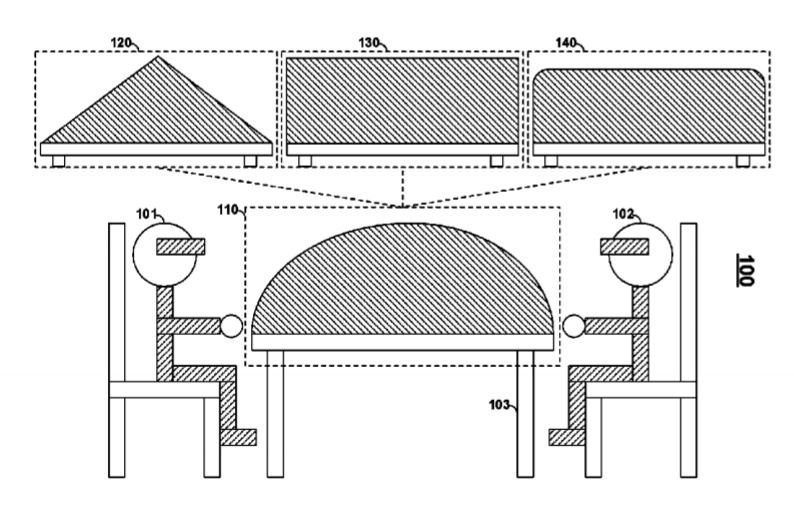