U.S. Patent No. 8,000,581: Advertisement scheme for use with interactive content 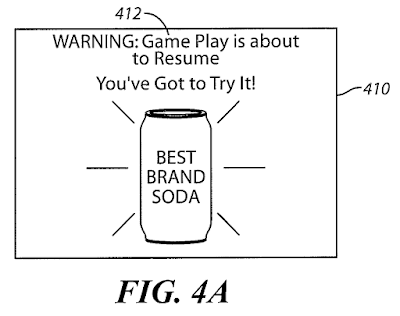 For anyone who’s ever been interrupted from playing a game by an advertisement, this patent at least tries to lessen the agony. Patent ‘581 describes a method to suspend gameplay, display an advertisement, and then resume the gameplay. After a game is initiated, the computer program will provide a player with an indication that the game will be suspended. This could include such indications as the game gradually slowing down, a warning indicating that game play is about to stop, or a visual signal such as a blinking light. A similar warning would indicate that the game is about to continue. The patent also describes the possibility of the program rewinding the game to some extent before resuming the gameplay. While advertisements are no one’s favorite thing to see while gaming, patent ‘581 at least allows free-to-play players to enjoy someone’s content without it impairing their ability to get that high score.