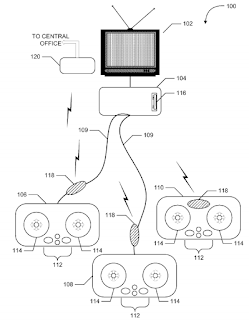 The ‘752 patent describes a device which can be attached to a controller to track data about controller use, primarily controller  movement. Movement data can include direction as well as magnitude. In addition to the tracking device, the patent describes a metering or recording device that maintains a record of the controller data. In addition to movement, the device might also track whether the device is on, whether the battery needs to be replaced, and the use of a transmitter.