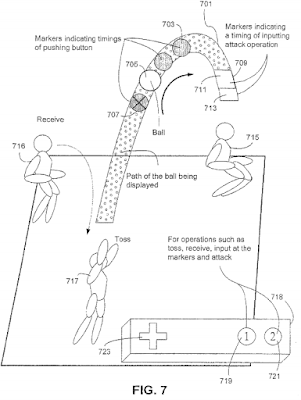 The ‘365 patent applies to sports video games with battle game aspects. The described game may deal damage instead of awarding points, allowing rounds of play to last longer. An in game character who has taken too much damage or lost too much health may be removed from play or die in the game. The player may use power-ups or different moves to increase the damage dealt by a particular play. The patent focuses on the integration of competitive battle game qualities into traditional sports games.
Abstract:

using the at least one processor, based on the further input from the first user, applying a power boost to the ball while it is flying along the trajectory.