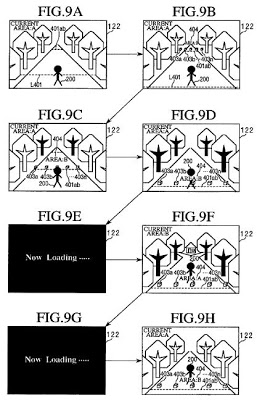 The ‘225 patent describes a system where the environment of the game changes based on the player’s movement during the game. A player, when he looks around him in a game, sees the surrounding environment immediately surrounding his character. The invention calculates the distance between the player and the boundary to determine what display should be shown. Whenever his character reaches the boundary of what the character can see, the invention updates the map and a new section is loaded; this provides a seamless transition from scene to scene without the player having to wait while the new area is loaded.