U.S. Patent No. 6,454,652: Video Game System and Method with Enhanced Three-Dimensional Character and Background Control Due to Environmental Conditions 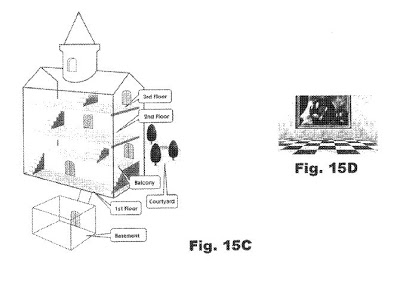 The ‘652 patent details a video game system which permits game play involving three-dimensional images to have a depth and realism that exceeds previous known game systems. This video game feature, exemplified by Super Mario 64, features unique player controls which permits control over a character’s exploration of the three-dimensional world. Before, when a level was completed, the player would be forced along the controlled path to the next object, but with this patent came the ability to continue to explore the worlds the player had completed in order to collect all stars, coins, etc. before moving on at his liking. In the case of Super Mario 64, whenever a player would go into a room in Bowser’s castle, he was free to jump through any portrait on the wall and explore any world he wanted, as many times as he wanted, in whatever order he wanted. It was a pretty novel idea for an ordinary plumber.

A video game system includes a game cartridge which is pluggably attached to a main console having a main processor, a 3D graphics generating coprocessor, expandable main memory and player controllers. A multifunctional peripheral processing subsystem external to the game microprocessor and coprocessor is described which executes commands for handling player controller input/output to thereby lessen the processing burden on the graphics processing subsystem. The video game methodology involves game level organization features, camera perspective or point of view control features, and a wide array of animation and character control features. The system changes the “camera” angle (i.e., the displayed point of view in the three-dimensional world) automatically based upon various conditions and in response to actuation of a plurality of distinct controller keys/buttons/switches.