U.S. Patent No. 7,640,300: Presence and notification system for maintaining and communicating information

U.S. Patent No. 7,640,300: Presence and notification system for maintaining and communicating information
Issued Dec. 29, 2009, to Microsoft 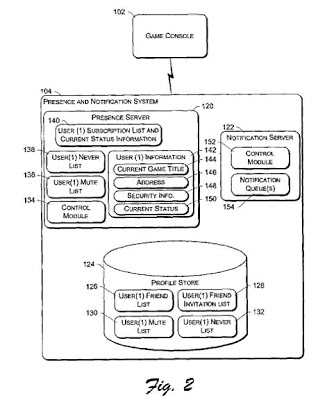 
The ‘300 patent provides for a system to assist in the Xbox Live experience. The invention describes a method for grouping information for all users together to allow for easier access whenever a player is online. Anyone who has played Xbox Live knows that a user can search recent players and scan their information to learn more about them. The player also has the ability to send a friend request to these players, which will allow the user to invite them to play a game with greater ease. The system described here notifies users whenever a friend is online, sends a message to the user, or invites the user to a game. Finally, the invention allows a player to invite a friend (player two), and then player two to invite another friend (player three).