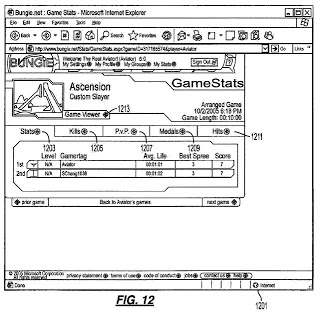 The ‘916 patent describes a computing network where, while one or more players play online, computer-readable media storage units collect telemetry data while the game is being played. The units then analyze this data and view location information of players throughout the game. Once the game is complete, all of the different player’s data is combined into one file to reduce redundancy. One reason behind this telemetry data collection is so that less skilled players can be matched up with more advanced players and thus will be afforded the opportunity to research the more experienced tactics. The telemetry data also collects stats throughout the game. For example, in Halo 2, the killer and the victim are recorded throughout the game and a running total of both a team score and an individual’s kill count are kept. Finally, the telemetry data is collected in order to identify and punish cheaters. Whenever a person is deemed a cheater they are effectively barred from logging back into the game.

1. In a computing network which includes one or more game consoles connectable to a secure private network on which players of an online video game can log on for purposes of playing the online video game and competing with one another, one or more computer-readable media storing computer-executable instructions for performing a method for collecting player telemetry data while the game is played and for analyzing the telemetry data recorded during a game session so that less skilled players have an opportunity to research tactics of more advanced players, wherein said video game comprises a simulated environment in which the game is played, and said telemetry data comprises location information corresponding to one or more events occurring within the simulated environment, and wherein said method is comprised of steps for: at one or more of the player consoles, recording game session telemetry data by either recording at least timestamp and location data for one or more predefined events which occur while the video game is being played, or recording player inputs and periodically recording