U.S. Patent No. 7,670,220: Racing games and other games having garage, showroom, and test drive features 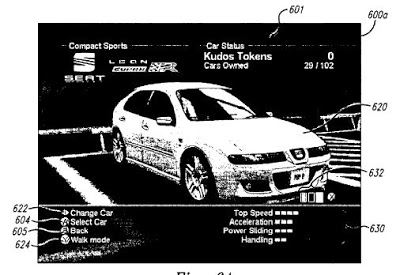 Summary:
The ‘220 patent describes a racing game where players enter a showroom filled with cars from which he can select one to race. The invention also lets the player take a test drive of a car before he commits to that car. The cars in the showroom are grouped by manufacturer to help a player locate a care more easily. By showcasing the cars in a garage and allowing the user to test drive the car before committing, the invention allows the user to select a car which matches his driving style closely and thus makes the game more enjoyable for the user.

Abstract:
Racing games and other computer-implemented games having garage, showroom and test drive features are disclosed herein. In one embodiment, a method for implementing a racing game in accordance with one embodiment of the invention includes displaying a plurality of cars in a simulated showroom setting. Game players can roam freely about the showroom in first-person mode and inspect the cars in close detail. If a player desires, he or she can test drive one or more of the cars to assess its performance before competing in a racing event with the car.