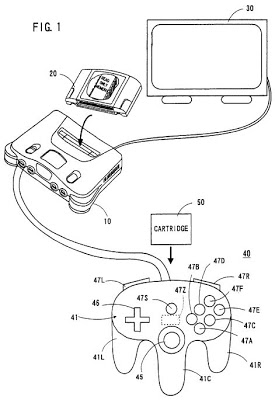 The ‘073 patent allows a player to lock his character onto a non-player object with the press of a button (the ‘Z’ button when playing the Nintendo 64). Once a player presses the Z button, the camera will automatically adjust so as to give the player the best view of the object he has locked on to and thus make it easier to see or attack that object. The camera is designed to go behind the player and give him a forward-facing view of the action which allows him to see the non-player object in front of him clearer.

1. A video game apparatus coupled to a display, comprising:

a camera controller for changing the position of said hypothetical camera such that photographing can be made on the player object directly facing the attention non-player object selected by said selector.