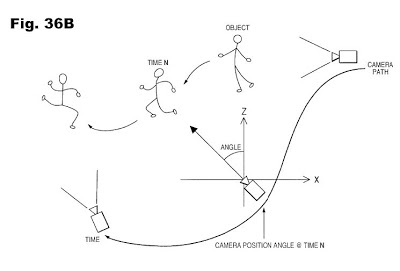 A video game system includes a game cartridge which is pluggably attached to a main console having a main processor, a coprocessor, expandable main memory and player controllers. A multifunctional peripheral processing subsystem external to the game microprocessor and coprocessor is described which executes commands for handling player controller input/output to thereby lessen the processing burden on the graphics processing subsystem. The video game methodology features camera perspective or point of view control features. The system changes the “camera” angle (i.e., the displayed point of view in the three-dimensional world) automatically based upon various conditions and in response to actuation of a plurality of distinct controller keys/buttons/switches, e.g., four “C” buttons in the exemplary embodiment. The control keys allow the user at any time to move in for a close up or pull back for a wide view or pan the camera to the right and left to change the apparent camera angle. Such user initiated camera manipulation permits a player to better judge jumps or determine more precisely where an object is located in relation to the player controlled character.

1. For use with a video game system console having a game program executing processing system for executing a video game program to create a display simulating a three-dimensional world, and at least one player controller operable by a player to generate video game control signals, a storage device for controlling the operation of said video game system console comprising: a memory media for storing video game instructions and graphics data; said video game instructions including instructions for initiating one of a plurality of camera modes and instructions for causing said game program executing processing system to respond to the detection of a player controlled character being in a predetermined state and for changing the displayed point of view perspective in the displayed three-dimensional world in response to detecting the predetermined state.