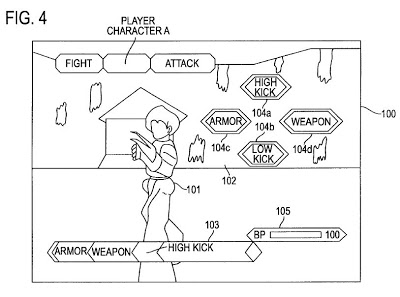 The ‘586 patent describes a system used in role playing games where the player is given full control over his character, including the ability to command the character. The player can manipulate the movement of the character by pressing certain keys. The game records every command that the player inputs. Points are awarded for successful commands. Commands may also be strung together to create combos. Once a combo has been successfully performed, the player can continuously move because the commands are stored and are selected with greater speed with each time they are performed.

1. A recording medium containing a program that allows a player to advance a game by manipulating a selected character displayed on a display screen through a key input according to the player’s intention, wherein the said program recorded in the recording medium enables input of a plurality of commands related to actions of said selected character in an action set frame on said display screen so as to set up the actions of said selected character as a single operation, wherein said action set frame is determined and generated on said display screen in response to said plurality of commands input by said player, and wherein said recorded program is capable of recording two or more of said commands if total action points are within the permissible range of action points for said action set frame, and the total allowed action points for said action set frame and points corresponding to each of said action command type are decided in advance.