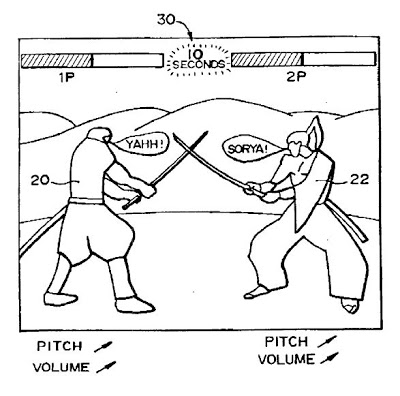 The ‘827 patent describes a game machine which can vary at least one of a pitch, volume, and tone of a character that appears in a game. The pitch and volume of the character’s voice is raised when the magnitude of the difference between two characters increases. The patent also details the variance in voice of the character as different stages of the game are cleared.

The objective of the present invention is to provide a game machine and an information storage medium that make it possible to intensify the dramatic effect of a game by the voices sounded by a character. The pitch, volume, or tone of each voice sounded by characters (20) and (22) is varied in accordance with a physical strength parameter, the remaining play time, the progressing degree through game stages, or a number of wins. The pitch and volume of a voice sounded by a character increase as an opponent’s physical strength parameter becomes larger, the remaining play time decreases, the final game stage approaches, or the opponent’s number of wins becomes larger. The pitch, volume, or tone of voices is varied after the remaining play time has reached a given value or a given game stage has been passed. The increase in pitch of a voice sounded by a character is a whole tone or less.