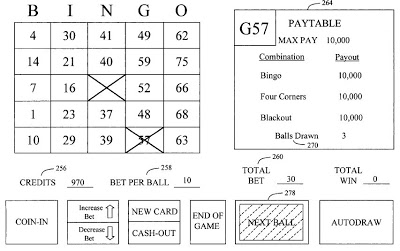 The ‘064 patent describes an interactive way to play a classing game of Bingo. Each game is charged to the player at the cost of a certain number of credits. The credits can be purchased by the user before the game. The reward of wining one of the Bingo games is a certain number of credits which the player could use to play other games of Bingo. The payout of the winnings varies based upon a graduated weighing function which weighs probabilities differently based on the circumstances of the game. The riskier the gamble, the higher the payout will be. The two types of games offered are four-corner Bingo and blackout Bingo.

A system and method of playing an interactive bingo game. Each game session comprises a plurality of game events in which the bingo game draws at least one bingo number from a set of bingo numbers. The player is provided with one or more bingo cards. The game drawn bingo numbers are matched to the bingo cards and the player is awarded a prize according to a dynamic paytable. The dynamic paytable depends on a plurality of dynamic variables that are modified during the game session. The dynamic paytable further comprises a plurality of triggering events that are associated with a plurality of bingo patterns, and a threshold event that is engaged after one or more triggering events. The threshold event is configured to determine a plurality of prize credits awarded for each subsequent bingo pattern. For the chargeable action embodiment, the player is charged one or more credits for each of the game events and the credits that are charged are determined by said player. For the average bet embodiment, the player is only charged at the beginning of the game session.

1. A method of playing an interactive bingo game, comprising: initiating a game session on a gaming device that comprises, a plurality of game events corresponding to the game session, a chargeable credit game condition, in which a first player selection is received for charging at least one credit for each game event; providing on a player interface, a player a bingo card having a plurality of integers configured in a grid pattern; performing the game events on the gaming device so that each game event comprises having the interactive game draw at least one bingo number from a set of bingo numbers; charging a player a quantity of credits obtained from an input component of the gaming device for each of the game events according to the chargeable credit game condition; awarding by the gaming device to said player one or more prizes according to a dynamic paytable that depends on a plurality of dynamic variables that are modified after each game event that charges according to the chargeable credit game condition, the dynamic paytable comprising, a plurality of payouts wherein each payout is associated with a corresponding game event, a plurality of triggering events wherein each triggering event is associated with one of a plurality of bingo patterns, a threshold event that is engaged after one or more triggering events, said threshold event configured to determine a plurality of prize credits awarded for each subsequent bingo pattern; repeatedly displaying each payout for the corresponding game event; repeatedly modifying the payouts during the game session for each game event so that each payout is modified according to a graduated weighting function that weighs probabilities more favorably as more game events are played during the game session; and enabling the dynamic paytable to be modified after each game event according to an equation: PAY(I)=ROI*ABET*WGT(I)*AL(IHIT)/PR(I) where, PAY(I) is a payout for a bingo pattern; ROI is an overall payback percentage; ABET is an average bet; WGT(I) is a graduated weighting function that weighs probabilities more favorably for game events that occur at the end of the said game session; AL(IHIT) is a pay allocation weighting function that determines the percentage of the total prize awarded for the bingo pattern; and PR(I) includes a probability for the next game event, wherein the next game event is the bingo number picked from the set of bingo numbers.