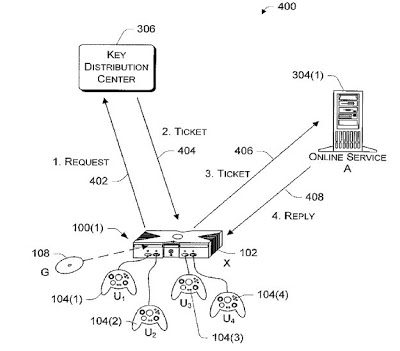 The ‘235 patent allows multiple users to connect to an online game through a single console. Thus, a player and up to three friends can be authenticated together when joining a multiplayer game. After the players are authenticated once, the process is sped up and the players are accepted together, without needing to be authenticated. This system also is designed to prevent cheating by authenticating the party and constantly checking for signs of cheating. If cheating is detected, the users, as a group, are kicked from the server and then marked as cheaters.

1. A computer-readable storage medium for a game console comprising computer-executable instructions that, when executed, direct the game console to: create multiple validated user identities (U1, H1), (U2, H2), . . . , (UU, HU) composed of the multiple user identities U1, U2, . . . , UU and associated values H1, H2, . . . , HU calculated from each user’s key; form a single request containing a game console identity X, a game title identity G, the multiple validated user identities, and an identity A of an online service, as follows: Request=[X, G, A, (U1, H1), (U2, H2), . . . , (UU, HU)]; and submit the request to a ticket issuing entity over a network, whereby the ticket issuing entity simultaneously authenticates each of the identities contained in the request.