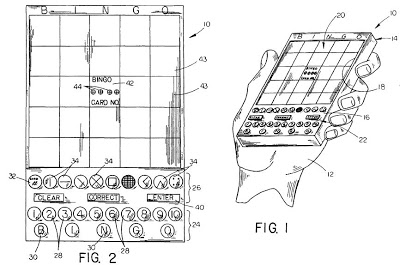 For those out there who love playing Bingo with multiple cards, but find it difficult to keep track of all those numbers, the ‘480 reissue patent tries to make your life easier. The patent describes a hand-held device whereby electronic cards are loaded into the device and keep track of the player’s cards and (hopefully) winnings. Whenever a number is called, the hand-held device automatically searches the stored cards for a match. If the number is a match, the device marks it off the card for the user. If the number is the winning number, the device signals that a winning pattern has been achieved and tells the user the winning pattern so he may call out the numbers and claim his earnings.

An electronic bingo playing apparatus and method involve the use of a hand held portable computer having a card memory which can store the content information from a plurality of standard bingo cards. This information is entered by a keyboard. Letter/number combinations which are selected during play of the game are also manually entered by the keyboard. The program memory then directs the microprocessor to search the stored cards for a match and any winning patterns of matches. Upon detection of a winning pattern, the portable computer responds with the winning card number, as well as the particular winning pattern.

a keyboard comprising a plurality of data entry keys and instruction keys,

and a program memory in which there is stored a software program to direct microprocessor operation,

said microprocessor being operative in play mode under the direction of said software program to scan the keyboard thereby to read each letter/number combination which is entered by said data entry keys, to scan the card memory to identify any matches between the last entered letter/number combination and the stored card content data therein, to accumulate said matches and to signal whether any winning patterns of accumulated matches have been achieved,

said data entry keys and instruction keys thereby being capable of entering all of the input information in both the setup and play modes of the microprocessor.