U.S. Patent No. RE37,948: Video game apparatus, method and device for controlling same, and memory cartridge for video game 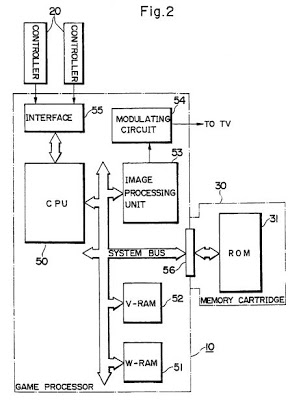 The ‘948 reissue patent applies conventional turn-based role-playing games or battle games (ex. Advanced Dungeons and Dragons or Wizard’s Crown). It describes a system which allows a player to execute an action commanded that causes the enemy character to execute a predetermined action. Each player (and computer enemy) have a set amount of time to perform an action before the other is allowed to take action. Whenever a player attacks an enemy, the enemy player has a chance to counter the attack with a certain action. The enemy player can input a command before the player has entered an attack. This way, the enemy attack will occur immediately after the player’s attack. This is to simulate actual combat with as much realism as possible.

Disclosed in a video game of enhanced realism in which actual combat is closely simulated. The game is so adapted that an enemy character on a display screen may launch an attack against a player character on the same screen, even while the player character is the process of inputting a command, at elapse of a set time period specific to the enemy character. The attack is made without an interruption in the flow of time of the game.