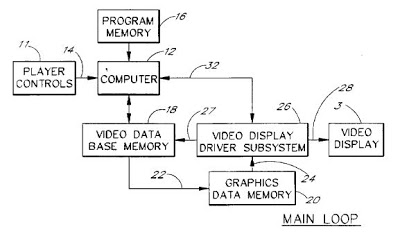 The ‘314 reissue patent first allows for a plurality of players to simultaneously and independently control the movements and actions of their individual characters. It also allows each player to enter and exit the game at any time without ending the gameplay for the other players. This feature improves the gameplay for the users because they do not have to have a committed group which will stay for the entire mission. Instead, by allowing the game to continue even if someone joins or leaves, it means the mission can be completed at anytime, not just whenever it is convenient for everyone involved. pThe system called for in the patent encourages players to either work together or compete with the other characters to defeat monsters, obtain possession of limited resources, or battle against the other users.

a plurality of sets of controls coupled to said central processing unit;

sofware means run by said central processing unit and coupled to said controls, and to said video display for reading player input from said controls and generating, storing, changing and outputting data for causing said video display to display a maze populated by a plurality of different kinds of characters each having attributes, said maze also being populated by a plurality of attribute-affecting entities including monsters, each said character having attributes including longevity and abilities including the ability to fight and to move, said attributes defined by stored data, said longevity attribute defined by stored data and decreasing over time and when that character is damaged by a monster, and including means for displaying different types of resources having characteristics defined by stored data and displayed on said video display throughout said maze in quantities and loctions established by said software means, said resources increasing the longevity attribute or otherwise affecting the attributes of the first character which is displayed to have obtained possession of them, and for causing said video display to display action by said characters and said monsters in accordance with rules of said game implemented by the following included means:

first means for allowing a plurality of players to each simultaneously and independently control the movements and actions of one of said plurality of characters in the video game via said controls;

second means for allowing any one of said plurality of players to enter the game at any time and simultaneously and independently control the movements and actions of one of said characters independently of when the other players started playing or when any other said player or players stops playing; and