U.S. Patent No. RE41,331: Playing an interactive real-time card selection game over a network 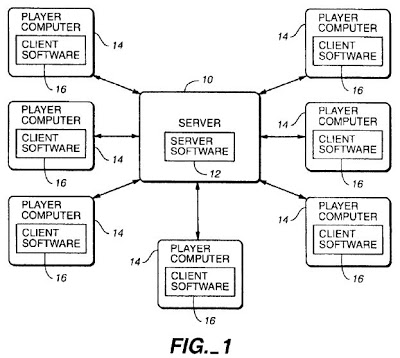 The RE41,331 patent describes a method for playing interactive, computerized card games. The cards are dealt by a computer and the betting is generated by the computer software. The program is written to have a time limit on betting. Each player who wants to play uses a computer to connect to the network where they can join up with other human players or stick to playing computer players. The network records the player’s name, IP address, and requested playing session.  The games continue until all player either leave, lose all of their money, or win the game.

A method of playing an interactive, computerized, multi-player card game in which desired cards are selected by players, some of which may be virtual players generated by the game’s software. Each real player uses a computer or similar device that is connected to a network. Virtual player card selection and betting is controlled by computer software. After each player has selected a card in a round, computer software determines what card each player is dealt. Null cards having no value in the scoring are dealt when there is a conflict in card selection or when a player fails to select a card within a time limit. The games follow the rules of poker.