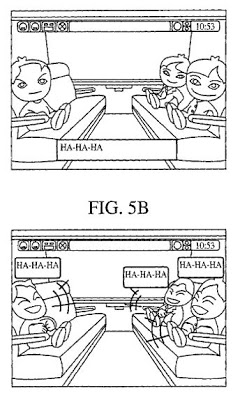 The ‘562 patent provides a system during an online game where players can interact with each other by text. Whenever players approach each other they have the ability to type words that the other players can read. The invention also allows a user, whenever he types “ha,ha,ha,” to move his character. Whenever this string of letters is typed the player’s character simulates a laughing motion. By allowing the player to type a command which produces laughter in his character, this invention enhanced the interaction between the players and makes the game more engaging for people.