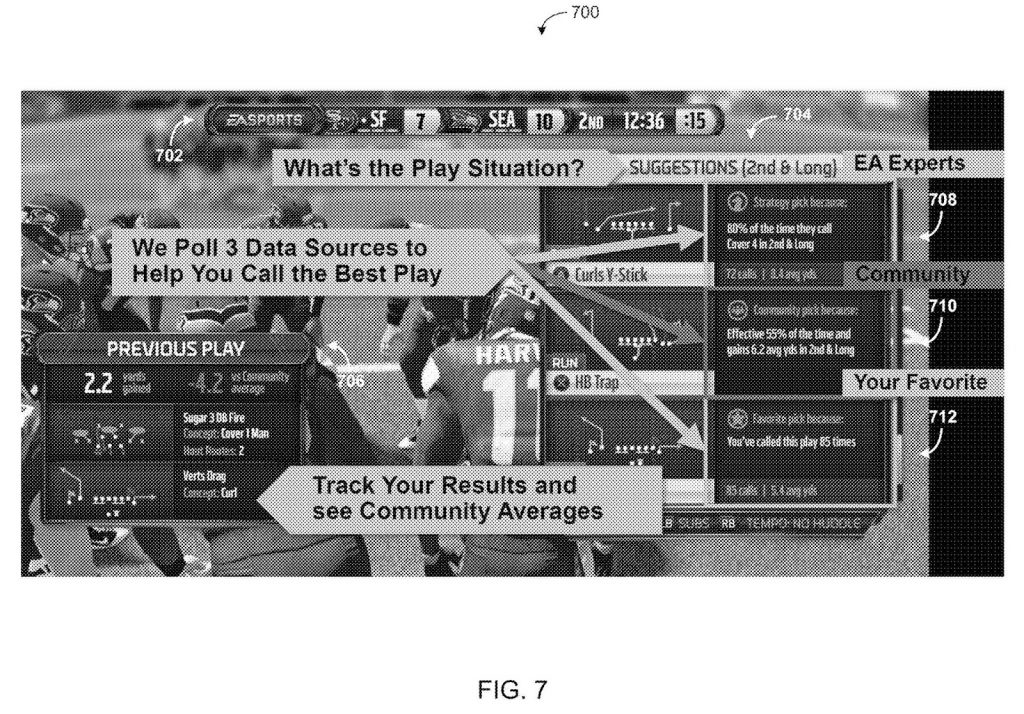 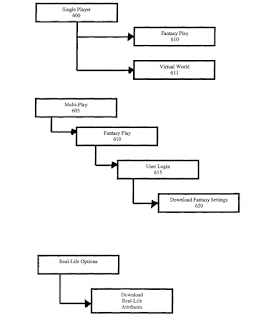 The ‘561 patent applies to networked games, like fantasy sports. A storage medium, such as a computer server, contains and maintains the rules of the game and character parameters, and also allows players to download certain game settings or components. The data on the server ensures consistent play experiences across multiple players.

Back in January we reported a new patent case filed by White Knuckle IP against Electronic Arts over updating sports video games based on real-life events during a season. The asserted patent was U.S. Pat. No. 8,529,350. That case was actually terminated and refiled as Utah District case no. 1-15-cv-00036 in February.

From our earlier report, the patent discusses how prior art games were fixed as of the day they were released. A real-life player’s outstanding performance or a major trade taking place during the season would not be reflected until the next version of the game was released. The system described in the ‘350 patent purports to solve this problem by downloading updates to game attributes that are based on real-life changes in players, teams, and venues.

EA filed an inter partes review (IPR) request yesterday with the USPTO to invalidate the patent (IPR2015-01595). EA argues that the ‘350 patent should be limited to updates applied to stadium or field parameters based on arguments made by the patentee during prosecution. Moreover, EA argues that their own earlier games teach all the features claimed in the ‘350 patent. EA points to the 2001 iteration of their popular FIFA soccer games and the 2000 version of their Madden football games as teaching the updating features claimed in the ‘350 patent. Of note is that one of the references cited by EA is a Madden 2000 Updates Website which included a “Playoff Week 1 Update” file.

At this time, the IPR has only been filed with the USPTO. The Patent Trials and Appeals Board (PTAB) will consider whether to institute the IPR based on EA’s arguments. If the PTAB institutes the IPR, EA and White Knuckle will fight it out at the USPTO rather than (or in addition to) the federal courthouse in Utah.

The full IPR petition can be found at https://ptabtrials.uspto.gov/.

We will continue to watch this case for interesting developments.

On Thursday, June 21, 2013, a group of current and former NCAA athletes sought class action status from a California federal judge. They allege that the NCAA violated anti-trust laws (as well as their right of publicity) by using their names and likenesses in television broadcasts and videogames without providing any form of compensation.  District Court Judge Claudia Wilken asked attorneys for the plaintiffs to, “disprove the NCAA’s arguments that the players” had different levels of ability and fame which would create a conflict within the class. Attorneys for the NCAA also alleged that class status could not be granted in regards to broadcasts because the broadcasts do not feature every athlete on a team’s roster.

Michael D. Hausfeld (of Hausfeld LLP) argued that the first argument was invalid because student athletes receive the same scholarships regardless of ability, and compensation from broadcasts could be distributed equally in the same manner. Hausfeld stated, “[d]istributing revenue from the conveyance of image and likeness, would correlate to that fairness principle by maintaining the equality of all the athletes.”  Furthermore, it would not be difficult to establish which athletes appear in the broadcasts because in other industries there are those who keep track of appearances. Gregory Curtner (of Schiff Hardin), arguing on behalf of the NCAA, stated it would be an arduous task, and that, “[a]scertainability is a big issue and [the plaintiffs] have no solution for it.”  Counsel for the players goes on to argue that the NCAA, by requiring players to participate as amateurs and prohibiting them from being compensated, for a, “horizontal agreement to not compete.”

The various lawsuits name the NCAA, game publisher EA Sports, and Collegiate Licensing Co. (a trademark licensing and marketing company). Trial is currently scheduled for February 2014. This case could be significant for EA because the NCAA players are seeking injunctive relief to prevent EA from continuing to make its NCAA series without providing compensation.  In the event that this happens, EA will need to decide whether to continue making its NCAA franchise without using the likenesses of current players to market the game, or start paying a new license fee.

We will update accordingly as more details come up.