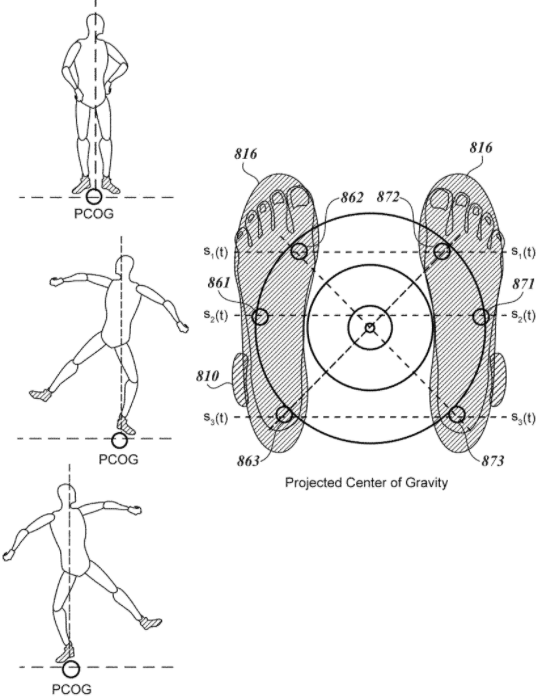 U.S. Patent No. 10,729,356 (the ‘356 patent) relates to footwear with sensors for tracking body movement. The ‘356 patent details a footwear system with a system in each shoe, each measuring force at certain locations on a foot. Footwear electronics communicate with the resistors and each shoe system is coupled with a game controller. The wearer’s weight data is taken by the foot sensor and sends it to a game controller and an initial sensor state is established based on the user’s weight. Activation of the footwear system then becomes linked to the user’s weight data.

The’356 patent can include sensors that contain an accelerometer (senses acceleration) and a gyroscope (can maintain a reference for direction because of stability). The system can also include a clock which communicates with a master device and can provide time stamps onto data collected by the various sensors. The footwear system can be configured for indoor use or outdoor use. The ‘356 patent could be used similarly to smart watches as used in the context of athletic activities or could be used to move an avatar in a virtual world. 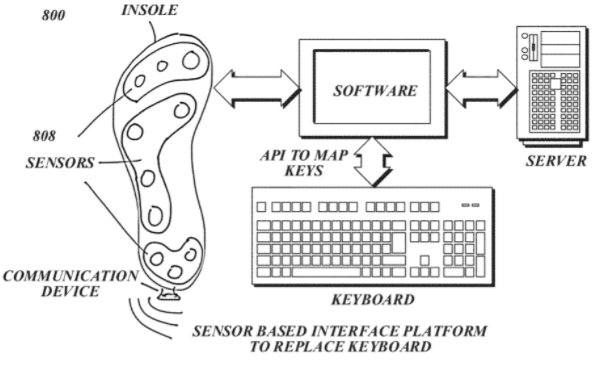 A method is disclosed for foot sensors to be used to determine at least two characteristics of a subject’s activity by using a combination of sensors for force and foot orientation/motion/position. A wearable footwear ecosystem is comprised of the subject’s footwear, sensor-enabled insoles or insertable devices, in- or on-footwear electronics that is hard wired to the sensors and may contain additional sensors such as accelerometers, a master device and means to communicate (typically wirelessly) among the various sensor platforms, and the master device including clock synchronization. Correlating the time stamps for data among various sensors, and the master device communicating wirelessly is critical to accurate determination of the desired characteristics. Multiple force-sensitive resistors on a common substrate are individually optimized for dynamic range. Pulse sensors using arrays of such force-sensitive resistors are implemented. The resultant system can profitably be used for gaming, biometric monitoring, and activity tracking.