Lindsay
Lohan v. Take-Two Interactive Software Inc., 156443/2014, New York State
Supreme Court, New York County (Manhattan).
In
2014 actress Lindsay Lohan filed suit against Take-Two Interactive Software
Inc. claiming that the video game Grand Theft Auto V violated Lohan’s privacy by
using her likeness without her permission.
Lohan accused Take-Two of basing the GTA character Lacey Jonas after her
with its similar style of dress and mannerisms. The Jonas character is a
celebrity who enlists other players to help her dodge paparazzi in a race
throughout Hollywood. Lohan alleged that the character had a similar voice and
similar physical features. She also stated that Take-Two unlawfully used her
signature peace sign pose.
Earlier
this month, the lawsuit was tossed out by a New York state appeals court after
the court found Lohan’s likeness was not used in the Grand Theft Auto video
game. The court stated that the game’s characters and unique storyline rendered
it a work of fiction and satire, and therefore the game was protectable by the
First Amendment.
The
court also dismissed Lohan’s claim that her image was used in the video game’s
advertising materials despite Lohan’s claim that the avatar used in the
advertisements was a depiction of her.
Lohan’s
attorney stated that they planned to appeal and we will provide updates in the
event an appeal is filed. 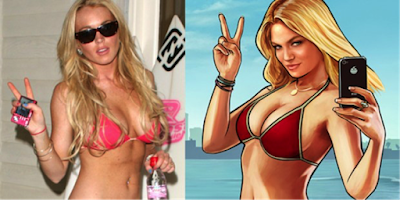