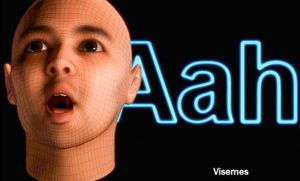 As previously reported, the patents in suit describe technology for automatically animating lip synchronization and facial expressions of animated characters, a technique commonly used in video game development.  Judge Wu of the Central District of California held the patents invalid as lacking patent eligible subject matter under 35 U.S.C. 101 in the wake of the Supreme Court’s Alice v. CLS Bank decision.  McRo appealed, and the Federal Circuit now reverses that holding.

Claim 1, which is dispositive for purposes of this appeal, reads:

To begin its analysis, the Court first performed some initial claim construction to help resolve the question of patentability under section 101, stating that the claims are limited to rules that evaluate subsequences consisting of multiple sequential phonemes.  Slip op. at 19.  With this in mind, the Court then went on to analyze section 101 in more detail.

As stated by the Court, the abstract idea exception prevents patenting a result where it matters not by what process or machinery the result is accomplished.  Id. (citing O’Reilly v. Morse, 56 U.S. 62, 113 (1854)).  One should not assume that such claims are directed to patent ineligible subject matter, however, because all inventions at some level embody, use, reflect, rest upon, or apply laws of nature, natural phenomena, or abstract ideas.  Id. (citing Mayo Collaborative Servs. v. Prometheus Labs., Inc., 132 S. Ct. 1289, 1293 (2012) (“Mayo”)).  Lastly, the Court compares and contrasts the Flook and Diehr decisions in the run up to its substantive analysis of the claims at hand.

Initially, the Court found that the District Court too broadly oversimplified the claims when stating the “idea” embodied by the claims.  Courts must be careful to avoid oversimplifying the claims by looking at them generally and failing to account for the specific requirements of the claims.  Id. at 21.  Instead of being drawn to the abstract idea of “automated rules-based use of morph targets and delta sets for lipsynchronized three-dimensional animation” as alleged by the District Court, the Federal Circuit found the claims instead to be limited to rules with specific characteristics.  The claims themselves set out meaningful requirements that must be taken into account.  Id.  Interestingly, the Court further relied on the specification to confirm the idea of the claim.  Id. at 22.  Because the claims are directed to rules with certain common characteristics, they are directed to a genus, and claims directed to the genus of an invention, rather than a particular species, have long been acknowledged as patentable.  See, e.g., Diamond v. Chakrabarty, 447 U.S. 303, 305 (1980).

The Court next turns to the preemption issue, and looks to whether the claims in these patents focus on a specific means or method that improves the relevant technology or are instead directed to a result or effect that itself is the abstract idea and merely invoke generic processes and machinery.  Id. at 23.

This is where we take a turn to the muddy.  In its attempt to articulate what the claims are actually directed to, the Court states “While the rules are embodied in computer software that is processed by general-purpose computers, Defendants provided no evidence that the process previously used by animators is the same as the process required by the claims.”  Uh-oh.  Did you see it? The Court conflates 101 with a prior art analysis that typically takes place under 35 USC 102-103, which hasn’t happened yet in this case. This is not the first time this has happened. To be fair, the Supreme Court did it first, and the Federal Circuit appears ready to throw in the towel and follow suit. Patent practitioners beware, it seems this technique of 101 analysis is here to stay.  If something is REALLY old, it’s an abstract idea, but if it’s instead just more recent than your own invention, it is just prior art. In any event, the Court ultimately found that it is the incorporation of the claimed rules, not the use of the computer, that “improved [the] existing technological process” by allowing the automation of further tasks. This is unlike Flook, Bilski, and Alice, the Court stated, where the claimed computer-automated process and the prior method were carried out in the same way (another conflation of 101 with 102 and 103).  Id. at 24-25.

Despite the fact that the court found that the claims do NOT preempt all processes for achieving automated lip-synchronization of 3-D characters, the Court takes it a step further. The absence of preemption does not demonstrate patent eligibility. Id. at 25.  Rather, the Court confirms that the claims do not preempt all techniques for automating 3-D animation that rely on rules, because the claimed rules must be rendered in a specific way.  This is one point that the Defendants will be sure to hone in on when it comes time for the trier of fact to assess infringement in the first instance, as the Court goes into some detail on alternative types of rules that could, in theory, exist or be used and not infringement the claims. Id. at 26-27.

Ultimately, the Court states that, when looked at as a whole, claim 1 is directed to a patentable, technological improvement over the existing, manual 3-D animation techniques. Id. at 27.  The claim uses the limited rules in a process specifically designed to achieve an improved technological result in conventional industry practice. Id. Claim 1 of the ’576 patent, therefore, is not directed to an abstract idea, and the Court need not address Alice step two. Id. The takeaway: SOFTWARE PATENTS LIVE ON!  Had these claims been struck down under 101, then thousands of other software patents would be of little more value than the paper they’re printed on.

As you may recall, when we previously reported on this case after oral arguments, we stated:

…in view of the overall tone of the questions, the panel seems more likely than not to reverse the district court’s holding of invalidity under Section 101, and remand this case for further proceedings to reassess 101 eligibility using the correct standard, and/or also to determine infringement and validity under 35 U.S.C. §§102-103 (novelty and obviousness).

We were mostly right.  The 101 issue appears to be resolved.

This just in.  McRO was reversed on appeal.  Decision is here.  More to follow.