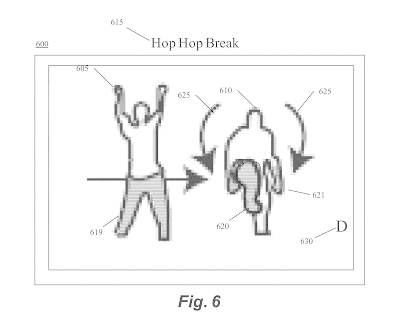 Summary:
U.S. Patent 9,358,456 (the ‘456 Patent) describes a method for a dance competition game using a motion camera. Previous dance games, like Dance Dance Revolution, required a mat or pad that had nine squares. Eight of the squares feature an arrow pointing in a particular direction. The game would display similar arrows in time with the music, and the user had to step on the corresponding arrow to earn points. The ‘456 Patent describes a dance rhythm game utilizes Microsoft’s Kinect or Sony’s PlayStation Eye instead of a dance mat. A user stands in front of the camera and mimics the movements of an avatar being displayed on the television. The camera evaluates the users movements and scores each movement on how closely it resembles the avatar’s movements. Harmonix utilized the ‘456 Patent to develop the Dance Central franchise.