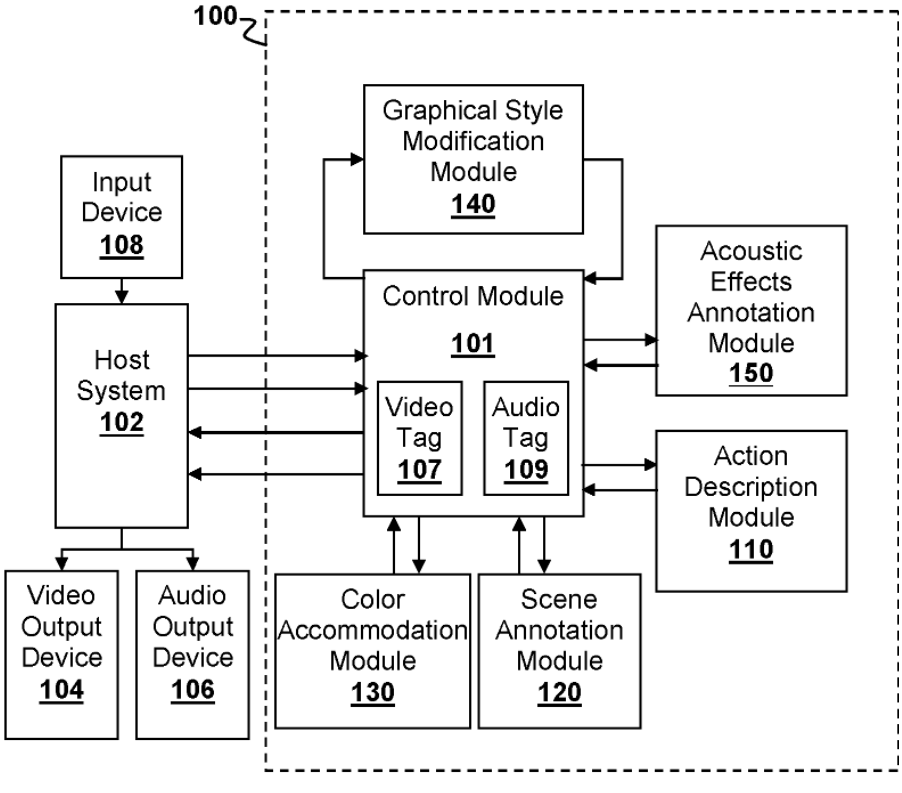 U.S. Patent No. 10,977,872 (the ‘872 patent) relates to modifying and enhancing graphics of a video stream via machine learning to accommodate users’ disabilities or preferences. The ‘872 patent details a system which adapts video frames in a buffered video stream of preexisting media. The video frames are treated as a source image to be altered by a style adapted from a target image, and the target image provides a desired style which a user chooses. The system can be implemented in hardware, software, or a combination of the two and uses machine learning to apply the modifications to media, so it potentially could offer a wide range of modifications. The style adapted video stream is generated by applying the style from the target image to the source image while the video buffers, so the user receives the media with their selected style change as the video stream plays, ideally without creating synchronization problems. This manifests as an On-Demand Accessibility system which disabled and nondisabled players can use to customize already existing media to their needs or preferences, and can be used over a variety of media such as video games and movies.

The system described in the ‘872 patent presently relates to Graphical Style Modification but also mentions several more potential functionalities providing support for a range of disabilities and preferences such as: Acoustic Effect Annotation, Color Accommodation, and Scene Annotation. This potentially could make games previously inaccessible to disabled players accessible, and lessen the workload of game developers who want to accommodate a wider audience.

Electronic Arts (“EA”) has pledged to help breakdown barriers for players with disabilities or medical issues through sharing technologies which help such individuals. EA has promised to not enforce its patent rights in (as of 9/8/2021) five patents, in hopes of these technologies being used by other developers to accommodate players. The only exception to this rule is if someone files a lawsuit against EA, it reserves the right to defensively terminate the pledge for only that party/individual.

This decision by EA to share technologies which help accommodate disabilities could help make the gaming space more accessible. It also comes at a time in which there has been a recent influx in patents which help accommodate disabilities or medical issues in gaming. An example of a similarly helpful patent (which we will cover soon) is U.S. Patent No. 10,977,872, which allows graphical style modification and is assigned to Sony Interactive Entertainment Inc.

“Patent pledges” like this are seen as ways to make beneficial technologies available to other industry players while still reserving defensive rights. For example, Tesla made a pledge in 2014 to allow anyone to use their patented technologies for electric vehicles, so long as they have not come after Tesla or any third parties with their own patent infringement claims on electric vehicles.

Overall, decisions like this may benefit the gaming community in becoming a more inclusive place. Experiences once unavailable to some may become available, and sharing technologies may mean that individuals will have access to more game experiences outside of just one publisher.