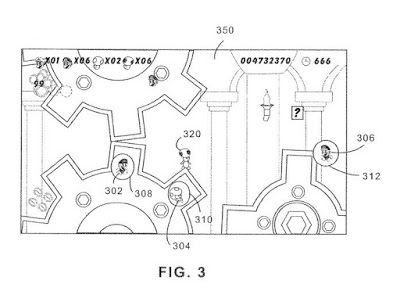 Summary:
U.S. Patent No. 9,446,312 helps both experts and beginners gamers play together. Often in a video game, if a player’s character hits an obstacle or fails a challenge, the character may lose health, return to the beginning of a level, or die. This becomes complicated if multiple players are playing a level together and the level is much too easy or difficult for certain players. It is neither enjoyable for a player if the game is much too easy or difficult for them.

A solution to this problem was shown at the E3 convention in 2009. During the demo for a Super Mario Bros. game, a character became encased in a protective bubble when the character lost a life. The character remained in the bubble until freed by another player. The character could not be harmed in the bubble, but also could not participate in the game. The player was penalized by not being able to participate directly but could continue playing once released from the bubble. This example helps to exemplify the ‘312 Patent. More generally, the patent outlines that if a certain condition is satisfied (a player dies, for example), the player’s game character is protected from harm for a period. Movements of the protected game character are controlled based on another player. In the example above, for instance, it is not until a non-protected character popped the bubble that the protected player could continue in the game.