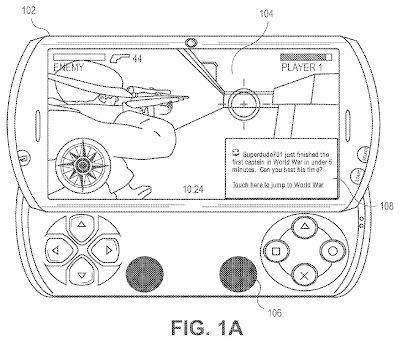 Summary:
U.S. Patent No. 9,511,292 (the ‘292 Patent) describes a method and system for in-game notifications. The notifications will alert a user if a friend has completed a predetermined goal in a video game. The goals can be achievements created by the game’s developers or custom goals created by a group of players. Once a user has finished a goal, the system sends a notification to every friend on the user’s friends list. Users can choose to receive notifications on any device, but certain features may not be compatible with some devices. A key feature described by the ‘292 Patent is the ability for a user to launch the game upon receiving a notification to beat the friend’s achievement. For example, if a user completes a level under five minutes, the notification sent out will encourage the friends to beat the users time by allowing them to launch the game quickly.

Abstract:
Methods and systems are described for automatically sending a popup or other message to another person’s electronic device upon finishing a predetermined goal in a video game. The predetermined goal can be, for example, killing a first boss in under five minutes. The message to the friend can include a link or button enabled such that the friend can begin the game on his device in the same room, mission, scenario, etc. that the first player started out in so that the friend can attempt to duplicate or ‘one up’ the first player’s achievement. Friends who are interested in receiving such messages can be determined from existing social networking sites.