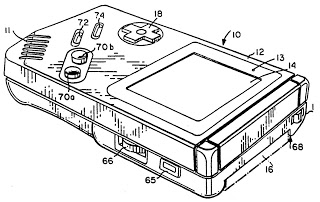 Summary:
U.S. Patent No. 5,184,830 is the American patent for the original Game Boy released in 1989. Nintendo filed the patent first in Japan and then in 1992 filed at the USPTO. The USPTO granted the 1989 priority date based on the Japan application. The patent describes a handheld gaming system that utilizes cartridges to store the game data. Game cartridges would be inserted into a slot on the back of the system. A switch on the top would turn the system on and off. The user is supposed to grip the systems with both hands so that the user’s thumbs rest upon the face buttons. Character movement was assigned to the D-pad while the A and B buttons handle action inputs. The Game Boy also featured a start and select button located at the bottom of the face plate. The start button typically started or paused the game, while the select button allowed players to select a game mode if offered. The Game Boy needed four AA batteries to operate, but the batteries could last up to thirty hours.

Nintendo released the Game Boy first in Japan on April 21, 1989, and then in North America on July 31, 1989. By the end of the Game Boy’s lifespan, including the Game Boy Color, over 118 million units were sold. In 2009, the Game Boy was inducted into the National Toy Hall of Fame.