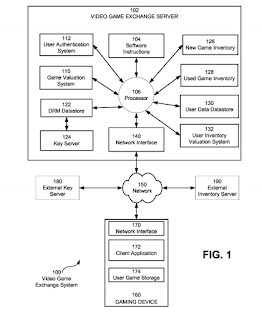 The ‘163 patent relies on a network and server to allow the resale of digital downloads of games. The system retains records of which games are owned on which devices. Additionally, the system keeps track of game prices for both new and “used” versions of a game, where a “used” version is a digital download being returned for credit towards other purchases. By keeping records of what is owned by whom, the system ensures that a game that is returned for credit does not remain in a player’s inventory after resale. The system focuses exclusively on the sale and resale of games on authorized devices.

retiring the first unique key of the digital game subject to the accepted offer from the datastore.