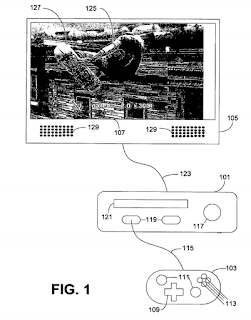 The ‘332 patent describes a video editor that displays game play clips created while the player is in game. The editor compiles game play video, records information about the clips, and can create compilations based on this information. The editor can also associate particular audio with different video clips, creating an audiovisual presentation. It’s also capable of video overlay editing and music editing. The editing software is used used on the game system, rather than on a separate computer or device.