U.S. Patent No. 8,523,673: Vocally interactive video game mechanism for displaying recorded physical characteristics of a player in a virtual world and in a physical game space via one or more holographic images

U.S. Patent No. 8,523,673: Vocally interactive video game mechanism for displaying recorded physical characteristics of a player in a virtual world and in a physical game space via one or more holographic images
Issued Sep. 3, 2013 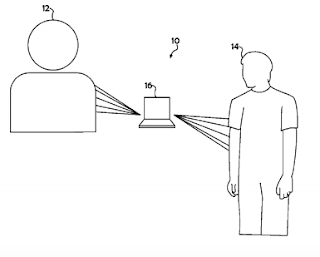 The ‘673 patent describes an invention that allows a player to personally interact with the game space. More specifically, the patent covers using a microphone to interact with a game system. Additionally, the patent includes scanning the player using a visual recording device, and transmitting that information in game to create a playable holographic image of the player. Through the same recording device, gestures made by the player will also be made by the holographic image.

The present invention is a vocally interactive video gaming mechanism. A microphone is connected to a video game system for allowing a player in a room to communicate by voice within the game. A video recording device is also provided for scanning and recording the physical characteristics of the player to be projected into the gaming world. A holographic projector projects the recorded physical characteristics of the player into the room in which the player is engaged in the game. Messages can be received from a telephone, a cell phone, a personal digital assistant, or a digital processor. Game progress can be halted in order for the player to answer or respond or to ignore the message. Movements of the player are tracked and converted into movements of the holographic projection of the player in real time. Voice recognition software enables translation of speech from one language into another language.

d) an audio speaker configured to generate sounds to accompany said one or more holographic images and said virtual avatar.