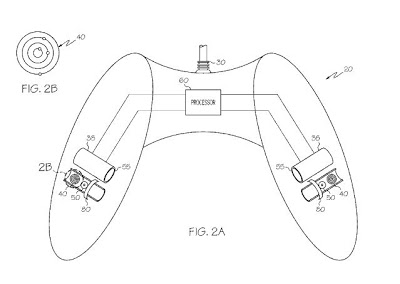 The ‘901 patent describes a game system where a player puts on a headset which measures his bio-feedback and displays it for him to see. The headset is designed to measure participant physiological data and incorporate it in real-time into the game. The headset includes a galvanometer which measures skin resistance, an ear piece which transmits audio from the game to the participant, and a microphone which allows verbal communication from the participant. The headset itself is electronically coupled with the handheld video game system. It’s an interesting concept, certainly something Stanley Kubrick would be proud of.