U.S. Patent No. 7,637,806: Method for dynamic content generation in a role-playing game 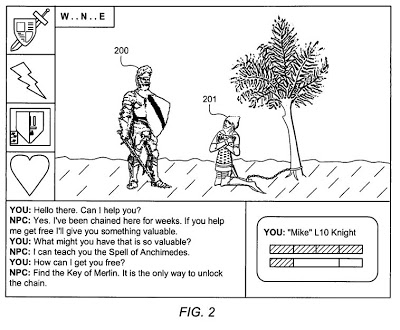 
The ‘806 patent provides a system where NPC (non-playing characters) can be programmed with different “goals’ during an MMOG game. A user can have his avatar approach a NPC and interact with him. Under this invention, the NPC will have a different interaction with the player each time depending on the internal time and past decisions the player has made. For example, at one point the NPC may need the player’s help setting a trap for a bear, when the next time he needs help with his campaign for mayor. By programming several options into the NPC, the invention attempts to make sure that the user’s past choices in the game matter and affect the game play.

The invention provides a role-playing game environment wherein the nature of various NPCs within the game may be varied over time within the game. The goals of various NPCs within the game may be dynamically and automatically changed within the game. At certain in-game time periods, the game server may dynamically assign one or more new goals for some or all of the NPCs based on the current status of each NPC. When a player later interacts with a given NPC assist (or impede) that NPC in reaching its currently assigned goal, the method may dynamically determine a steps that the player’s avatar may perform to assist (or impede) the goal. Thus, players cannot predict what will happen when they move through the game and reach a location at which they can interact with a given NPC, making the game-playing experience ever fresh and challenging.