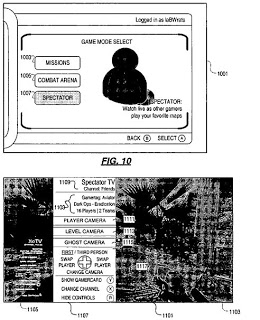 
The ‘186 patent provides for a system which allows a player to observe other game sessions without participating. The invention monitors the gameplay and allows the player to access game stats (score, time, etc .) in order to follow alongside the game. The invention is intended to allow novice players the chance to watch other players and learn moves or tactics which will help in their progression. Since different players advance through the game at different paces, this observation mode allows a player to learn without being disadvantaged while playing.