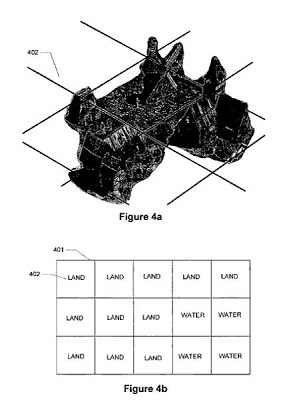 The ‘742 patent seeks to make video games more interested by describing a random map generation system. The invention randomly generates a map by assigning values to a number of different elements that may appear on the map (hills, water, weapons, etc.). The generator analyzes the weights of objects, the character in play, and the situation in order to make the fairest map possible. The invention seeks to make the game play fun for the user by changing the landscape, but it is programmed to not make unfair maps which would make the playing difficult for the player’s character.

The generation of a random map for use in a video game may involve a random value generation function, with weighted texture and/or object values to control whether certain textures and/or objects are placed at certain locations on the map. Some locations may have no objects, or may have rivers or cliffs added. Additionally, equitable object placement for multiple players may be accomplished using object constraints. Closest point determination may be used for certain object types, while other objects may have constraints relaxed if initial placement efforts are unsuccessful. As a further addition, physical modeling of a humanoid form may be accomplished using a three-part model, where angles on the model drive the display of animation frames for the object.