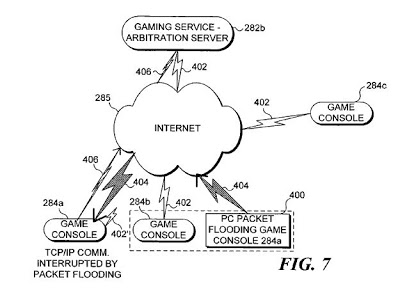 Official results for an online game session are determined by an arbitration server based upon reports received from each game console participating in the game session. The reports provide results for all of the players participating in the games session. Before starting the game session, each game console registers the players using it with the gaming service, so that a player who disconnects mid-game can be identified. If the results reported differ, predefined arbitration rules are applied to determine the official results. If a game console cannot report because it is being packet bombed, a different protocol is used to transmit a data packet to the arbitration service indicating that the gaming console is being packet bombed. While not required, the arbitration server can use historical data recorded for each player to apply the predefined arbitration rules in determining the official results.