U.S. Patent No. 7,497,779: Video game including time dilation effect and a storage medium storing software for the video game

U.S. Patent No. 7,497,779: Video game including time dilation effect and a storage medium storing software for the video game
Issued March 3, 2009, to Nintendo 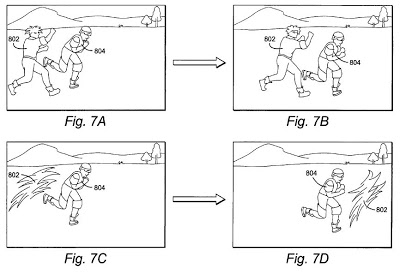 The ‘779 patent describes a feature used in the Max Payne series of video games—the ability to change the laws of physics depending on the state of the game character. In these games the player has the ability to slow down the game world in order to provide his character with special abilities. Generally, when this invention has been implemented, the camera shifts to the first-person view of the character while the time is slowed. This gives the player the feeling of actually being the character as opposed to just controlling a figure on the screen.

The passage of time and/or the laws of physics may be changed depending on the state of a game character. For example, the slowing down of the game world may provide the game character with special abilities move quickly in a very short period of “game world” time.

U.S. Patent No. 7,503,006: Visual indication of current voice speaker
U.S. Patent No. 7,027,034: Method of moving objects on TV monitor, the computer and recording medium for executing the method