U.S. Patent No. 6,935,959: Use of multiple player real-time voice communications on a gaming device 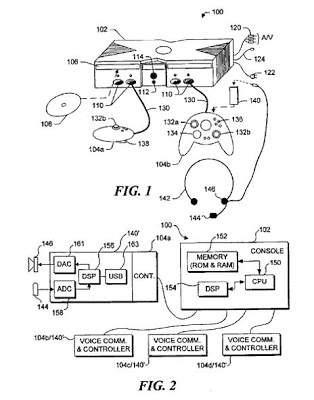 1. For use with an electronic game played on at least one multiplayer game console, a method for enabling players to verbally communicate in real-time while playing the game, comprising the steps of: (a) providing an audio sensor for at least one player who is using the multiplayer game console, said audio sensor producing an input signal to the game console in response to sound produced by said at least one player; (b) providing at least one sound transducer that is adapted to produce sound audible to another player of the game in response to an output signal; (c) encoding the input signal from the audio sensor to produce an encoded digital signal; (d) conveying the encoded digital signal through a voice channel associated with said other player; (e) decoding the encoded signal in the channel of the other player, to produce the output signal; and (f) providing the output signal to the sound transducer to produce an audible sound corresponding to the sound produced by said one player, so that a verbal communication by said one player is heard by said other player of the game.