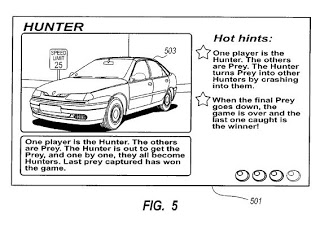 The ‘776 patent provides a new multiplayer feature for the user. One of the users has a car different from the others (for example, player 1 can be a cop car while the other players are sports cars). All the cars are designed, when playing this mode, to have the same features so that no car has an unfair speed advantage over the other cars. The user who starts as a different cop is the ‘predator’ whose goal is to catch the other players (the prey). A prey is caught whenever his car is run into by a predator, which then turns the prey into another predator to help hunt the remaining prey. The last player to remain as prey is the winner.

Methods and systems for administering and playing a multi-player computer game are disclosed. During the multi-player computer game, players are either identified as a predator or as prey. The predator players attempt to catch the prey, and the prey-players attempt to evade the predator(s). When a prey is caught, the caught prey becomes an additional predator. During game play, predator players’ display screens may display a directional arrow indicating the direction of the closest prey, and may also display a map indicating a position of each remaining prey. Predators may be displayed on each participants display screen with a first graphically depicted appearance (e.g., a police car), while prey may be depicted having a second graphically depicted appearance (e.g., a sports car). The game ends when no prey remain, and the last caught prey is the winner.