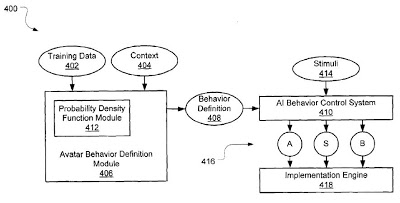 
Racing-based computer games typically include a mode in which one or more human players can compete against one or more computer-controlled opponents. For example, a human player may drive a virtual race car against a computer-controlled virtual race car purported to be driven by Mario Andretti or some other race car driver. Such computer controlled opponents may be enhanced by including a sampling of actual game behavior of a human subject into the opponent’s artificial intelligence control system. Such a sampling can allow the game system to personalize the behavior of the computer control opponent to emulate the human subject.