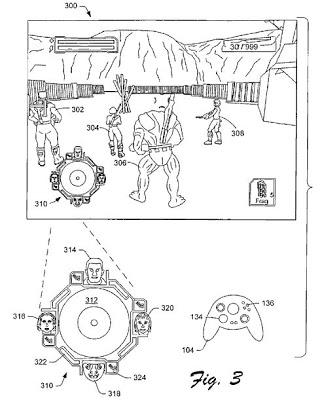 The ‘847 patent provides for a squad-based game whereby the player can select characters and give commands which the computer characters will obey. The user interface contains character profiles of one or more of the multiple characters and icons associated with the character profiles that represent the current commands. The player uses the D-pad on his Xbox controller to pull up the command menu, and can then select a command which will be directed at the rest of the squad.

A squad command interface for a squad-based shooter video game maps character selection and command selection to actuators on a game controller. Players can select squad characters and issue a single order to multiple characters with few controller actuations.