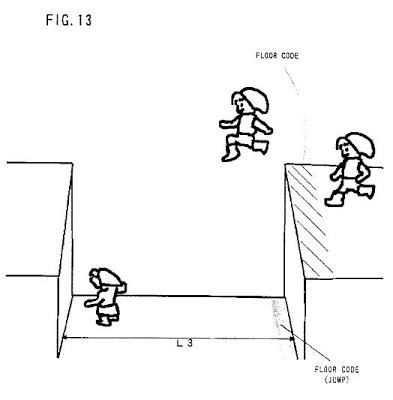 The ‘357 patent describes a game storage medium that stores player and land data. The land data includes attribute data representative of shapes. The attribute data includes an action code which defines an action of the player. When the player approaches a relevant land object (e.g. a hole or a wall), the player may make an action in compliance with a detected action code and detected land object state, e.g. jump, getting over a wall, etc. When the size data of the action code (the jump) is equal to or lower than the predetermined size data of the hole, the player’s character will fall into the hole.

A video game apparatus includes a CPU. The CPU detects an action code of a land object existing in front of a hole. If “jump” is the action code, a height (or depth) of the hole is calculated. When the hole height is greater than a predetermined height, a jump distance is calculated for the player object, and the CPU causes the payer object to jump in accordance with that distance.