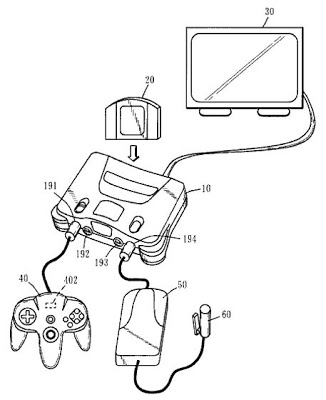 The ‘666 patent deals with speech recognition. Whenever a player speaks into a microphone, a converter converts the analog speech into digital speech data, allowing a speech recognizer to recognize a word. The converter can recognize the corresponding word and cause the object on the television to perform an action based on the recognized word if a match of the word is made. The patent also provides for a possibility of delaying action of the character based on time demands. If the player speaking into the microphone delays a command, it will appear in a different color than the immediate action commanded.

An image processing device which changes the way speech recognition results are processed as the program progresses. A video game machine body 10 causes a television receiver 30 to display given images and to output given sounds in accordance with a game program stored in a ROM cartridge 20. When a player enters a speech from a microphone 60, a speech recognition unit 50 recognizes a word corresponding to the speech and sends the result to the video game machine body 10. The video game machine body 10 causes the state of a dialogue partner object displayed on the television receiver 30 to change on the basis of the recognized result received from the speech recognition unit 50. The relation between the recognition result and the control of the displayed dialogue partner object is changed as the program progresses, which gives variety to the game and makes it more amusing.

1. An image processing device for varying action of a dialogue partner object displayed on a display device in response to a spoken word input from a user through a microphone, comprising: a converter for converting an analog speech signal inputted from said microphone to digital speech data; a speech recognizer for recognizing a word corresponding to the digital speech data converted by said converter; a determiner for determining whether the word recognized by said speech recognizer matches a predefined word to be inputted at that time; a first display control controller for, when said determiner determines match of words, controlling a displayed state of said dialogue partner object to cause said dialogue partner object to perform an action corresponding to the recognized word; a second display controller for, when said determiner determines a mismatch of words, making a determination display on said display device to deliver information on the determination made by said determiner to the user; and wherein said second display controller makes a display on said display device, as said determination display, to show that said dialogue partner object cannot understand the input word.