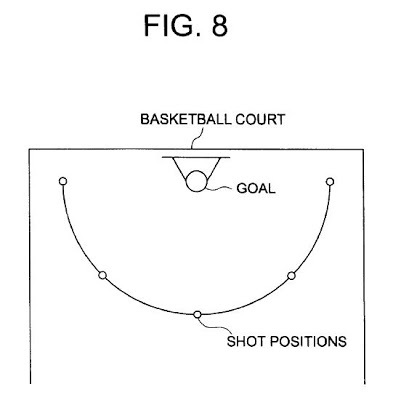 The ‘065 patent describes a system in a basketball game which features a shot meter allowing the player more control over the shot. If the player stops the meter at a certain spot his shot percentage will drastically increase and almost assure he will make the shot. While the shot gauge can help determine success of a shot, it can also determine the failure of one. If the player presses the button and stops the meter at a poor spot, the shot will be a failure and will not go in. Another factor in making the shot will be the location of the shooter when he takes the shot. If the player takes a shot that is easily makeable, the shot percentage area will be increased so as to make it easier to stop the gauge in that area. The area will decrease if the player is attempting a poorly advised shot.

In a game device for use in displaying an image on a display device to play a video basketball game in response to an operation of a user, a shot image which takes a shot at a goal by a character is displayed on the display device while manipulation timing of the user is monitored to determine whether the shot succeeds or not. On the display device, a gauge is displayed which has a shot success zone and a movable cursor and which is used to determine whether the movable cursor is placed within the shot success zone at the manipulation timing. The gauge is helpful to determine success or failure of the shot.

1. A method of displaying an image on a display device to play a game of basketball in the form of a video basketball game in response to an operation of a video game player, comprising the steps of: displaying, on the display device, a shot image of taking a shot at a goal by a character selected in the video basketball game; displaying, on the display device, a gauge which is extended from one end to another end and which has a shot success zone, a shot failure zone, and a movable cursor movable from one end to another end of the gauge; moving the movable cursor within the gauge from one end to another end at a predetermined speed; stopping the movable cursor in response to the operation of the video game player; judging whether or not the movable cursor is stopped in the shot success zone to determine success or failure of the shot; visibly displaying a timer gauge on the display device to represent a shooting time which varies with time; and measuring the shooting time whether or not a predetermined time lapses; the shot success zone having a width determined by bars which are displayed in the gauge and which are varied in number in accordance with a degree of difficulty of the video basketball