U.S. Patent No. 6,422,939: Storage medium for storing an application program for a car racing game 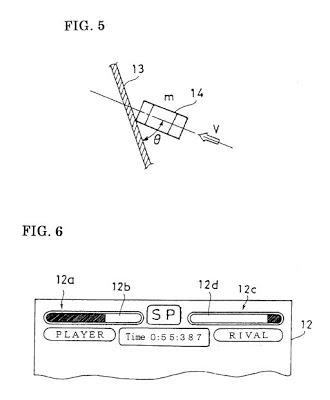 The ‘939 patent provides for a car racing game where the player has unrestricted access to the racecourse before the start of the race. A race does not begin until the player passes an opposing car and is then passed by the same car in return. The game is set up on a point system where each player begins with a certain number of points and then points are deducted in various amounts. Players lose points for colliding with walls, hitting other cars, or trailing the leader. Thus, players should strive to drive carefully and to lead the race at all times. The game ends when one player’s points reach zero.

A car racing game in which a player drives unrestrictedly on a racecourse until the start of a race. A race begins when a player passes an opposing car and is passed by the same car in return. The player loses points when trailing the leading car, based on the distance the player is behind, and also when colliding with walls or other cars. A player wins the race when the opposing car’s points drop to zero.

1. A storage medium storing an application program for a car racing game comprising: a main menu subprogram enabling a player to select a car for racing, change car parts, view information on opposing cars, change a functional arrangement of controller buttons before the player begins driving on a predetermined racecourse; a free driving subprogram enabling the player to drive freely on a predetermined racecourse while searching for opponents until a race begins; a car racing subprogram for implementing passing and other aspects of a race from a point the race between the player and an opponent begins until the end of the race; and an end-of-race processing subprogram for displaying results of the race, displaying or saving a replay of the race, and allowing the player to select whether to return to free driving or to the main menu; wherein the car racing subprogram includes a race result determining subprogram for providing players with an initial point value at the beginning of a first race to enable the players to start and continue races, determining a positional relationship between cars and calculating the distance there between at prescribed periods, decreasing points of a car trailing a leading car by a predetermined subtraction value corresponding to the distance between the cars, and determining a winner of the race when the opponent’s points drop to 0 and ending the race at that point.