U.S. Patent No. 6,368,111: System and method for interactively simulating and discouraging drug use

U.S. Patent No. 6,368,111: System and method for interactively simulating and discouraging drug use
Issued April 9, 2002 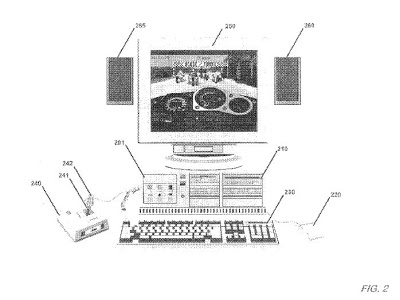 The ‘111 patent describes a system for interactively simulating and discouraging drug taking behavior. The invention allows a player to simulate ingestion of drugs. Let that sink in for a moment. In the game, whenever a character ingests a drug, the screen simulates the effects. This allows the player to feel enhanced sensations, as if he were truly ingesting the drug. After a predetermined amount of time, the effects wears off. The character then begins to go through withdraws and the player must obtain and take another dose. With each repetition, the character’s “highs” begin to shorten and the player must find and ingest more and more drugs in order for them to have an effect on the character. Thus, like in real life, the character’s tolerance builds and the need for more drugs grows stronger. Finally, the game also allows the player to drive while his character is on drugs. The intention, obviously, is to show how uncool drugs are. Much like in South Park when Randy Marsh became addicted to Heroin Hero: 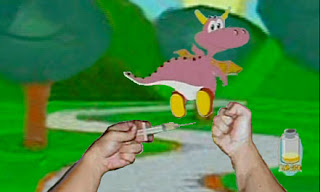 No matter how hard you try, you’ll never catch the dragon.

A system and method is disclosed for interactively simulating and discouraging drug taking behavior, in which a simulated ingestion of drugs provides an initial enhanced sensation of movement and sound, and apparent enhanced player performance. After a determined time, the effect wears off, the player must take time to obtain and take another dose. The scenario is repeated, but with each repetition, tolerance to the drug grows, the “highs” are shorter, and a growing percentage of the player’s time must be devoted to obtaining and taking the drugs. A series of repetitions turns initial elation into frustration and strongly discourages drug use. The invention is illustrated by an implementation in the form of a modified multimedia motorcycle racing game.

1. A system adapted to the use of discouraging drug use by the user of said system, comprising:

a processor for playing an interactive game program;

data recorded in connection with said program which sets a base range of parameters for controlling said game characteristics;

an input control whereby the user is presented the simulated opportunity to ingest a dose of a drug;

a circuit, responsive to said input, to alter at least one of said parameters in accordance with characteristics of said drug, so as to cause the execution of said program to simulate the drug-influenced state resulting from said ingestion, and enhance said game characteristics;

a timer, and a circuit responsive to said timer to further alter said at least one parameter in a manner responsive to the elapsed time from said ingestion, as indicated by said timer, so as to reduce said enhancement of said game characteristics, until the same are reduced below said base level;

U.S. Patent No. 10,967,276: Collaborative online gaming system and method
FLASH OF GENIUS: Would a patent attorney be a hero or villain in film?
U.S. Patent No. 9,381,430: Interactive video game using game-related physical objects for conducting...